From Cars to Planes and Back Again, Part Two

Part One of this series of articles concerned General Motors’ Eastern Aircraft Division (EAD), an entity made up of five previously separate automobile and component manufacturing plants that were combined into one business unit to assemble Grumman Avenger and Wildcat aircraft during World War II. The exemplary performance of each facility and the group as a whole resulted in EAD receiving several awards for quality and manufacturing excellence despite having to overcome numerous expected as well as unforeseen challenges.

In contrast to EAD’s record of success, Part Two examines the lesser performance of another GM factory, the Fisher Body Division in Cleveland, OH. Unlike EAD this facility built its own design, the P-75 Eagle, and appeared to have several advantages in its favor that had the potential to facilitate replication of EAD’s achievements. However, other factors came into play that outweighed or negated many positive aspects, resulting in this facility producing the lowest number of complete aircraft by any of the pre-war automotive companies.

Pre-War History: The Fisher Body Division of General Motors had a long and historic presence in Cleveland well before World War II. Its first facility, identified as Fisher Body Plant 1, opened in June 1921 to build bodies for the Cleveland Automobile and the Chandler Motor Car Companies. Due to the success of both cars the plant was enlarged soon after it opened such that it went from turning out 150 bodies a day in 1922 to employing 7,000 workers in 1924 that produced 600 bodies per day.

These separate companies merged in 1926 to form Cleveland-Chandler Motors Corp. which was sold to Hupp Motor Car Corp. (of Hupmobile fame) in 1928 (Source: https://www.chicagoautoshow.com/history/1921/)

After Fisher Body became a division of GM in 1926 the facility was devoted to building bodies solely for GM automobiles. Ten years later the plant achieved notoriety on December 28 1936, when 300 workers initiated a sit-down strike that spread to other Fisher Body facilities. The strike was settled peacefully in February 1937 with GM’s agreement to recognize the United Auto Workers union as the labor representative of its employees. A subsequent strike in 1939 was much more violent and also historic in that the city’s law enforcement personnel were under the direction of public safety director Eliot Ness, the former Chicago-based federal agent responsible for successfully pursuing gangster Al Capone (and later writing a book about his experiences called “The Untouchables” that became a famous TV show). After being a focal point for industry labor unrest the plant provided tank and gun parts and engine nacelles for B-29 airplanes during World War II. When the conflict ended it reverted back to auto production until its closure in 1983.

Development of a New Facility and Focus: Henry Ford was able to indulge a long-standing interest in mass-producing airplanes when in 1941 the Ford Motor Company garnered a contract to produce complete B-24 bombers at a specially-built plant in Willow Run, MI. With the possible stimulus of a rivalry between the companies, GM also became involved in producing aircraft by establishing the aforementioned Eastern Aircraft Division. Then in an apparent effort to increase its resources devoted to producing planes GM made three successive key moves: 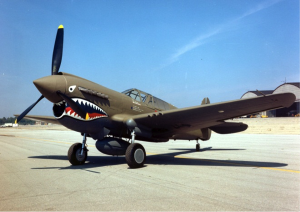 The P-40 achieved lasting fame as the aircraft flown by the “Flying Tigers”, and this example from the Air Force Museum’s collection is painted with the unit’s markings (Source: National Museum of the US Air Force)

Aircraft that contributed major assemblies to the proposed P-75 design

Looking left to right, the original P-75 design incorporated outer wings from the P-40, tail section from the Douglas A-24 (Army version of the Navy’s SBD dive bomber), and landing gear from the F4U Corsair (Source: National Museum of the US Air Force)

In the spirit of desperate times calling for desperate measures, AAF officials accepted Fisher’s proposed design. Their acknowledgement of the design expertise of Don Berlin along with the anticipated cost and time savings in getting the aircraft to production were undoubtedly powerful inducements to the AAF. As a result the company was awarded a contract to build two experimental aircraft designated XP-75 at the Cleveland factory, which as stated previously was contracted to build B-29 aircraft. Therefore, to accommodate future P-75 production the responsibility for the B-29 assembly work was transferred to a Martin Aircraft (now part of Lockheed Martin) facility in Omaha, NE that had previously built B-26 bombers. Thus, in addition to producing the P-75 the Cleveland plant would continue to make parts for the B-29.

Although B-29 assembly was moved to Omaha, NE, the Cleveland facility retained its status as a major parts manufacturer and supplier proudly supporting the B-29 program

Mission and Design Changes: While Fisher Body was gearing up to produce the XP-75 the war situation changed in that American bombers flying from England and Italy were experiencing unacceptable losses to enemy aircraft during raids into Germany. At this time large segments of their missions to bomb military and industrial targets were being flown without the protection of escorting fighter planes. This is because existing US aircraft did not have the range to accompany the bombers for an entire mission. As a result the enemy fighters would wait to attack the bombers after their escorts were forced to withdraw, and though the bombers were heavily armed, they were overwhelmed by waves of defending interceptors. With high bomber loss rates threatening to halt the entire effort the AAF needed a new escort fighter and saw the XP-75 as the answer. As a result the mission for the new XP-75s changed from interceptor to bomber escort. And because of the urgency of the situation Fisher Body was awarded a contract for six additional experimental planes in order to decrease the testing period and deploy the planes into combat as soon as possible. A production order for 2500 aircraft would be issued contingent upon the successful completion of all tests.

As the XP-75 began to be developed into an actual prototype its premise of using existing assemblies from production aircraft began to unravel. For example, the original plan had been to use the outer wing panels from the Curtiss P-40E, but aerodynamic issues soon forced Fisher to switch to using the same panels from the P-51. Other problems required redesign of the tail, resulting in major modifications to what had been off-the-shelf use of the original A-24 tail assembly. These and other changes involved a great deal of alterations to the fuselage to accommodate the new assemblies, resulting in increased cost and delays due to consequent redesign of the jigs and fixtures needed for mass production.

The design issues caused the date of the first flight to slip from May to November 17, 1943. The test pilot’s report after the flight pointed to several serious deficiencies, among them poor stability and a lack of maneuverability, with the plane showing a tendency to stall and spin when making tight turns. As a result further redesign was required, but even with all of the XP-75 aircraft engaged in the test program by the spring of 1944 the instability problem continued to be a major concern. Additionally, the Allison engine was a disappointment in that it failed to provide its full rated power and was experiencing problems related to inadequate cooling.

The End of the Program: With so many technical issues to resolve the first P-75A production prototype finally flew on September 15, 1944. By this time crashes had claimed two of the experimental planes and in the following month one of the early production planes also crashed, all resulting in the deaths of two of the pilots. The period required to complete further testing meant that the timeframe for full production was now projected for mid-1945. With the war well in favor of the US and its allies as well as the proven performance of the P-47 and P-51 aircraft as bomber escorts the AAF decided to cancel the whole program on November 8, 1944, after only eight experimental XP-75s and six production P-75As were delivered. The cost to complete this small number of aircraft was almost $50 million for the combined experimental and production units. After completion of other tests the remaining aircraft were disposed of with the exception of serial number 44-44553, which is on display at the National Museum of the Air Force at Wright-Patterson Air Force Base in Dayton, OH.

After discovery of extensive corrosion in 1999, the museum’s P-75 underwent a lengthy restoration and is now exhibited in its Research and Development Gallery (Source: National Museum of the US Air Force)

Postwar Use of Fisher Body Cleveland: When the war ended the War Department closed the plant and attempted to sell it but no takers were found. The City of Cleveland was one of the no-bidders, for although it was offered the opportunity to lease the facility for $1 per year city officials feared that the maintenance costs would be unaffordable. As a result the plant had a brief initial postwar career as an exhibition hall and sales center but was shortly leased out to a company for soybean storage. By 1950 the Korean War was expanding and GM needed a facility to manufacture tanks for use in this new conflict. GM’s Cadillac Division moved in and the renamed Cadillac Tank Plant produced several models of tanks, self-propelled guns, artillery, and armored personnel carriers until 1972, when GM’s last Army contract at this facility was completed. Once again, the plant was offered for sale by the government. After GM and the surrounding cities of Brook Park and Cleveland did not submit bids the Park Corporation of Charleston, WV, bought the facility in 1977. Its initial plan to create an international trade mart did not come to fruition but in 1985 Park Corporation opened the facility as the I-X Center. After additional expansion since its opening the facility continues to hold various events, including the annual Greater Cleveland Auto Show.

Lessons Learned: As evidenced by the production record of GM’s Eastern Aircraft Division, the P-75 program did not fail due to the company’s inability to produce quality aircraft. Nor was it a reflection of industry-wide problems in manufacturing airplanes. In comparing EAD to Fisher Body Cleveland’s experience the major problem was that the Grumman Avengers and Wildcats produced by EAD were well-developed prior to their being turned over to GM. Also, the use of assemblies from existing products to create a new design is a concept that offers advantages in the automotive industry but as the P-75 effort showed is much less applicable to aircraft development, particularly for high-performance machines. In a related item, combining development and production on almost anything is a concept that has been proven to be largely unsuccessful, and on complicated items like aircraft this fact has historically been true as well. Lastly, the high regard for Don Berlin as a designer may have caused AAF officials to overlook initial design deficiencies in the P-75’s proposed design, which may have been exacerbated by the urgency of the wartime situation at the time of the release of the original AAF request. If so, the platitude “haste makes waste” comes to mind as a takeaway from this experience.

For more information about General Motors and the P-75 program here are some sources: