What Does the Hertz Bankruptcy Mean?

Economic Repercussions for the Auto Industry and Car Owners

Hertz, the 102-year-old and iconic car rental company, filed for bankruptcy protection on May 22.  The obvious reason was the coronavirus pandemic that crippled global travel, but like so many human victims of the virus, Hertz had underlying health issues that weakened its ability to withstand the disease.

The bankruptcy filing has repercussions that have affected, and continue to affect, the auto industry and the markets for new and used cars.  But let’s start at the beginning:

The company that became Hertz was founded by Walter L. Jacobs, who launched his “Rent-A-Car, Inc.” in Chicago in 1918.  A dozen Ford Model Ts comprised the original fleet, and by any measure, the new business was a success.  By 1923 the fleet encompassed some 600 vehicles, and Jacobs sold the company to John D. Hertz.  Through the ensuing decades, a succession of ownership entities came and went, including RCA and a subsidiary of the Ford Motor Company.  Most recently, Hertz has been owned by an assortment of private equity firms.  At the time of the bankruptcy, well-known investor Carl Icahn held some 39% of Hertz shares.

For decades Hertz was the number one car rental company, a fact utilized to great success by rival Avis in their “We Try Harder” advertising campaign.  Hertz’s own advertising included memorable television spots such as “Let Hertz Put You in the Driver’s Seat,” in which happy travelers floated down from the skies into a Hertz convertible.  Hertz also pioneered the use of African-American sports stars as advertising spokespersons, with a series of ads featuring O.J. Simpson running through airports. 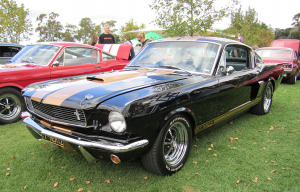 Hertz’s placement of Carroll Shelby-modified Mustang GT350H cars in their fleet in 1966 is the stuff of rental-car legend for automotive enthusiasts.

The company took on far too much debt.  It made some poor choices of cars for its fleet.  It made a questionable move of its headquarters from New Jersey to Florida.  It went through multiple CEOs between 2013 and 2020.   When the coronavirus pandemic hit and rental-car demand flatlined, bankruptcy clearly was in the cards for Hertz.

By the end of March, Hertz had nearly $20 billion in debt with only $1 billion of available cash. Hertz financed itself mostly by means of loans secured by its fleet of cars.  Because of the pandemic, used-car values sank fell right alongside the collapse of the car-rental market.  Hertz was unable to make the payment to its lenders.

A significant portion of the company’s debt resulted from its 2012 purchase of Dollar Thrifty, an acquisition intended to counteract the rise of Uber and Lyft.  The debt affected Hertz’s ability to update its fleet, resulting in customers being offered a fleet both older than that found elsewhere and consisting of too many ordinary sedans and too few popular SUVs.

The move from high-tax New Jersey to low-tax Florida looked attractive, but even with generous state and local incentives, no such move is without costs.  When a number of key New Jersey employees chose not to make the move, the impact was felt especially in the company’s accounting and IT departments. The Dollar Thrifty acquisition posed challenging accounting issues, and updates to the Hertz IT systems lagged behind those of the competition.

Once the pandemic took over, Hertz let go of 12,000 employees and put another 4,000 on furlough.  Vehicle acquisitions were cut by 90 percent and all nonessential spending was halted. But the bankruptcy handwriting was on the wall.  Kathryn Marinello, one of four CEOs that passed through Hertz in a six-year period, was quoted in May as saying “No business is built for zero revenue.”

When Hertz’s lenders were unwilling to grant it another extension on its debt payments, the bankruptcy filing was triggered.  It’s a Chapter 11 filing, meaning Hertz and its subsidiaries will continue to operate, and, presumably, a new and leaner Hertz will emerge.  Maybe.  Creditors will have to settle for less than full repayment, but the company may be able to survive in a pared-down form.

A Blow to Car Values and Sales

Since the bankruptcy filings, we have seen headlines along the lines of “Hertz’s Forced Fleet Sale Will Depress Used Car Market.”  It will.  And it will also affect new-car sales.  But by how much?

Hertz had just over half a million vehicles in its US fleet at the end of 2019.  Keep in mind that Hertz, like all car rental companies, is regularly selling cars to freshen the fleet.  So any bankruptcy-driven sell-off numbers need to be compared to the company’s usual figures.  And in order to continue operations as the pandemic eases and travel begins to increase, Hertz cannot totally gut its fleet.

In addition to business and pleasure travel needs, a significant portion of the car rental business stems from incidental needs.  These include temporary rentals for times when one’s primary car is in the shop, as well as longer-term rentals for collision repair.  So here again, if Hertz is to continue to operate through the bankruptcy process, it needs cars. 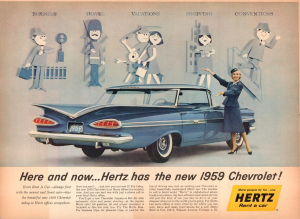 Under Chapter 11 terms Hertz isn’t obligated to start selling right away, and there are in fact some restrictions to selling right away.  But keeping all those cars is not a good thing because they continue to depreciate whether rented or parked.  It is likely that we will see a meaningful increase in Hertz cars on the market sooner rather than later.

Okay, so there will be more late-model used cars available.  Based on the widely-known principle of supply-and-demand, that might mean that buyers could find a good deal on a used car.  But that could be offset by lower values for those seeking to sell or trade-in their car.  Want to lease?  Lease pricing going forward will be affected by the anticipated residual values.

A meaningful percentage of rental cars are re-sold via the large vehicle auction companies such as Manheim and Adesa.  Manheim reported what they described as an “historic fall” in used vehicle prices as cars and trucks were coming off lease and not being sold. There had been some recovery in recent days, but figures remain lower than a year ago.

At the same time, new-car production has been stunted by the pandemic and continues to be affected by supply chain issues. Auto manufacturing plants throughout North America were closed for much of March and all of April, and not all have re-started production.  There are no assurances going forward, either. A “second wave” of the virus could force the factories to close again, and even plants that can remain operational may be hamstrung by the lack of available parts due to production difficulties elsewhere.  If there are fewer new cars on dealer lots, will buyers opt for a clean used car instead?

Another wrinkle is that other car rental companies may reduce their fleet sizes, too.  They may not be on the verge of bankruptcy, but “new normal” is the catchphrase of the day and it remains to be seen how the other companies respond.  The coronavirus and “stay-at-home” directives caused airline travel to drop to the lowest levels since the 1950s, before the jet age.  Air travel is starting to recover but it’s still well below the usual level for this time of year.

And then consider this: Fleet sales – sales to rental car companies, government agencies and commercial entities – accounted for about 17%, or 2.9 million, of the 17 million vehicles sold in the US in 2019.  Of that, well over half, some 1.7 million vehicles, went to rental car companies. That all came to a screeching halt when the coronavirus crisis took hold.  It has been estimated that there may be no more than 250,000 such sales in all of 2020.  The auto industry hasn’t exactly been in the best of health in recent years, so what does this portend?

Fleet sales to rental car companies isn’t a profit center for the automakers, but it does move the metal.  Margins are low on fleet sales, but fleet sales increase production volume and generate cash flow.  The Detroit automakers and particularly Nissan depend on rental fleet sales of what amounts to hundreds of thousands of vehicles a year.  Will the sudden pandemic-driven drop in fleet sales cause automakers to raise prices?  Will they discontinue certain models that depend heavily on fleet sales?  Will more job losses at US auto plants result?

The Road Ahead is Not Clear 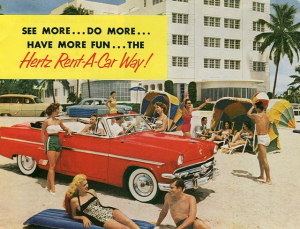 Still, most analysts think that the Hertz bankruptcy will be manageable for the auto industry – as long as it’s only Hertz.  If additional large players in the rental market do not go under and do not make draconian cuts to their vehicle purchases, the outlook is not grim.  It’s not pretty, with many pundits not seeing a strong recovery until 2022, but the Hertz bankruptcy alone should not bring the industry to its knees.

During the past three months, consumer retail prices for vehicles have remained remarkably stable.  In March and April, sales of new and used cars fell sharply as consumers stayed home and some states ordered car dealerships to close their sales departments. We have seen gasoline prices plummet and airfares drop significantly.  But prices for both new and used cars have, so far, dropped little.  So is this good or bad?

With millions of people out of work because of the crisis and millions more now working from home, one would expect sales volume to fall, and it has.  Cox Automotive, an industry research firm, estimates that sales volume for April had a decline of 47 percent for new vehicles and 34 percent for used vehicles as compared to the same period in 2019.  For the first 20 days of May, the sales volume was down 32 percent and 6 percent, respectively, again as compared to the prior year.

Being unemployed is, of course, a disincentive to buy a car.  People who have jobs but aren’t driving as much might not feel motivated to buy something newer.  And yet, there have been aspects of the coronavirus crisis that have supported demand for new or used cars. Some people have become reluctant to use public transportation or ride-sharing services.  Others have found that the Federal stimulus payments and enhanced unemployment benefits have provided the opportunity to replace an older car or add a second one. And with limited opportunities to spend elsewhere – no restaurants, no concerts, no professional sports – might be spurring some people to see now as the right time to buy a car.

The Hertz bankruptcy process is ongoing as we write.  The stock price has, somewhat inexplicably, rebounded multifold.  The Hertz brand, with a century of name recognition, will likely survive.  The fate of creditors, investors, and franchise holders (many Hertz locations are in fact franchises) remain to be seen.  But if you’re thinking about a Buick Encore or a Nissan Sentra, the time may soon be right.