Does the Aeroscreen Spoil Indy Cars?

Let’s get something out of the way right up front: I’m an old guy who misses the days of variety and innovative thinking at Indy.  While I am by no stretch an engineer or mechanic, Chris Economaki once described me in his Editor’s Notebook as “a nuts and bolts guy” for my penchant for highlighting mechanical differences in my race reports for the then-weekly National Speed Sport News.

The story of the Cummins Diesel, which raced at Indy the same year that I was born, was one of the first to gain my attention when I was a child.  A decade later the beginnings of the “rear engine revolution” in the 500 were riveting to this young fan.  And the variety show continued.  The STP Turbine!  Turbo Offys.  Four-Cam Fords.  Even Porsche power!  It was all so cool.

Only when wings took root in the early 1970s did I begin to question “progress.”  The wings, I thought, spoiled the looks of the cars, and at a relatively young age, I began the long, slow slide toward Old-Fartdom.  Today, when I go to the short tracks to see my beloved Midgets, I hate all the tin now climbing up and across the roll cages.  These are supposed to be open cockpit cars!  And get off my lawn!

So, when the Aeroscreen was introduced for Indy cars in 2020, I was not particularly receptive.  While I love racing in part because of the extreme challenges it presents, I have never considered the drivers to be disposable.  Innovations to protect the drivers are fine with me.  But that Aeroscreen… it sure looked ugly, especially from the front. 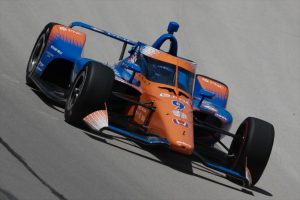 Watching the NBC network broadcast of the race, I discovered that I actually liked the Aeroscreen.  I expected to hate it.  In the months leading up to this race it had been noted by others that the Aeroscreen looks better from the side than from the front.  From my vantage point on the sofa I found the side view to be very compelling.  The popular phrase these days is “badass,” and somewhat to my surprise while watching the race I realized that I thought the side view of the Aeroscreen looked badass.

The front view still suffers, however.  But on television it varied depending on the color of the center post.  When the center post was black or a similar dark color, it tended to disappear visually.  Those with brightly colored center posts looked the most like the split windshields on 1940s road cars.  Indy cars should not conjure up visions of Tow Mater from Cars.

Post-race reports from the drivers appear to indicate that some work is still needed to better ventilate the cockpit, and it remains to be seen whether the Aeroscreen will provide the protection we all desire to reduce tragic losses.  But this grumpy old man has to admit, even while griping that open-cockpit cars should be open-cockpit, the Aeroscreen is not as bad as I feared.