It’s mid-August as we write, and the COVID-19 pandemic continues to wreak havoc on most car-related events. So we’re looking back one year, to August, 2019, when Ray Evernham set a goal of reaching 200 miles per hour in a 1936 Chevrolet sedan. 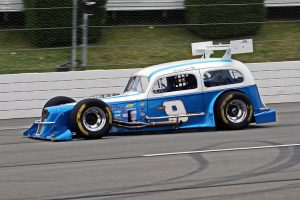 Of course, it was not any run-of-the-mill 1936 Chevy. Evernham, the New Jersey-born racer who was elected into the NASCAR Hall of Fame Class of 2018, built what he described as “my dream Modified from when I was a kid.” Marrying a classic oval track stock car body shape to a purpose-built modern racing chassis, without regard to the specifications of any particular sanctioning organization, Evernham’s “Ghost” is low, sleek, bewinged, and packs an all-aluminum, 850-HP V8 engine that redlines at 9,000 RPM.

While every part of the car is modern and state-of-the-art, one piece is not: The body. It really is a 1936 Chevy sedan, rescued from a junkyard. Naturally it has been extensively massaged, but there is no question that it was birthed originally by Fisher Body.

The finished car is ready both for the track and for the show field – it is beautifully detailed.

80-Year-Old Shape with a Newborn Heart

Once the car was completed, Evernham began enjoying setting goals and meeting them. One of them was hitting a top speed of 200 miles per hour. But first, he entered the car in the venerable Pikes Peak Hill Climb in 2018. “The Race to the Clouds” dates back to 1916, and in his first attempt Evernham scored a class win and finished 18th overall with a time of 10:11.3. This bested even the well-funded Bentley Bentayga of Rhys Millen. Millen is a veteran of the event while Evernham was considered a rookie.

But the Pikes Peak run did come at a price. The thin air at the higher elevations damaged the engine, which pushed the 200 mph attempt, originally planned also for 2018, to 2019.

Come last summer, the venue was the Pocono Raceway in Pennsylvania, during what proved to be the last visit to the 2.5-mile “Tricky Triangle” by the NTT Indycar Series, August 16-17-18. Once Indycar qualifying was completed on Saturday, Evernham took to the track. His target was to attain a top speed of 200 mph on the main straightway.

While Evernham had taken advantage of the opportunity for some practice laps in the car on Friday during the Classic Racing Times’ vintage Indycar sessions, for the official speed run his plan was to take just one lap and go for it. There is no radar gun nor other speed device at the end of the Pocono straight, so Evernham had a GPS speedometer in the car that would record the top speed.

As Indycar fans and team members watched, Evernham got everyone’s attention immediately. On his first lap, entering turn three to set up for the 3700-foot straightaway, the car executed a snap spin, which Evernham later attributed to changes he and his crew made to the car overnight. Evernham, who most people know as a winning crew chief and car owner in NASCAR, has an extensive racing background as a driver and did a great job keeping the car off the track’s unforgiving walls. He drove the car back to the pits.

A quick check showed that there was no damage aside from a tweak to the left-side of the nose wing where it had clipped some infield grass. So without so much as a tire change Evernham returned to the track and aimed for the target. Wasting no time, he blasted the car past the massive Pocono grandstand and, he hoped, into the record books. 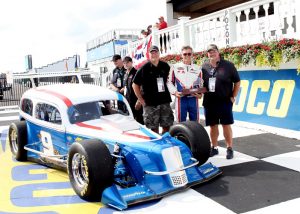 Upon returning to the pits, Evernham brought the car to victory lane where he was all smiles. Did he reach 200 miles per hour? We all waited, because the top speed readout was in the car. Your author joined Evernham on Pocono’s victory lane tower and, p.a. microphone in hand, put the question to him.

“196,” he answered with a good-naturedly. A mere four miles per hour short of his stated goal.

Although an accomplished racing driver himself, with affable self-deprecation Evernham joked that to get the elusive extra four miles per hour “I might have to put one of my friends in the car,” referring to any one of the many NASCAR Cup drivers and Indycar drivers with whom Evernham has close ties.

In between practice runs on Friday and the Saturday top speed run, Evernham and his crew made several changes to the car, not the least of which was fabricating and installing a new hood scoop to alleviate an aerodynamic issue that was starving the engine for air at high speeds. The car’s rear wing, mounted at the rear of the roof, was also trimmed out for greater speed, and “we may have gone too far,” Evernham said, adding that the car was loose which contributed to the first-lap dramatics. 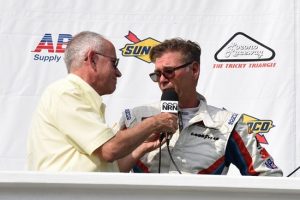 Looking Back and Looking Ahead

Asked whether the run was a one-and-done bucket list item or would he would return to try to reached the magic 200-mph mark, Evernham did not hesitate to say that he would love to try again.

Later, back in the garage area, Evernham showed us his in-car video, wanting us to see the GSP screen top out at 196. It seemed almost as if he wanted to prove to us that he really did reach a mere four MPH under 200. He didn’t need to prove it to us. The racing world is full of cagey characters and people seeking both mechanical and psychological advantages. But we’ve known Ray Evernham for over 30 years and he’s no bull slinger.

Since the top-speed run at Pocono, Evernham has continued to challenge himself and the “Ghost,” including racing the car in the 2019 HSR Daytona Historics at Daytona International Speedway and competing in the 2020 Leadfoot Festival in New Zealand. The car may resemble the oval-track Modifieds of Evernham’s New Jersey youth, but road racing and hillclimbs are part of the car’s tasks today.

Here is a video of Ray Evernham’s Run to 200, including both the abortive first attempt and the 196-MPH top-speed run: