All Speedways Great and Small

It almost seems like ancient history already: On February 12 it was announced that the 2020 Formula One Chinese Grand Prix, which was scheduled for April 19, had been postponed as a result of the coronavirus outbreak in that country.  Since then, around the world motor racing and indeed virtually all sporting events have fallen victim to their own cancellations or postponements.

The first four races of the 2020 NTT Indycar season – canceled.  NASCAR’s events at Atlanta and Homestead-Miami – postponed.  The balance of the Formula E season – suspended.  The IMSA has postponed the 12 Hours of Sebring from March 21 to November 14.  The NHRA has postponed the Gatornationals, not yet specifying a new date.

And then, the grassroots local events were hit as well.  When on March 12 New York Governor Andrew Cuomo issued a directive barring all public gatherings of more than 500 persons, the first domino to fall was the 2020 finale of the Indoor Auto Racing Championship Series, which was to begin the following day in the Exposition Center at the New York State Fairgrounds in Syracuse.

Construction of the temporary indoor speedway had just been completed.  The next morning, the same crew that built it began dismantling it.

Within hours, additional venues for local and regional racing events began issuing statements ranging from cautious monitoring of developments to outright cancellations.  In North Carolina, an executive order from Governor Roy Cooper banning gatherings of over 100 people led the Hickory Motor Speedway to pull the plug on racing planned for March 14.  In Pennsylvania, where the historic Williams Grove Speedway was able to present its season opener on March 15, the track elected to cancel its March 20 based on recommendations from Governor Tom Wolf. 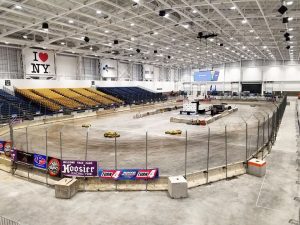 On the car show side of the ledger – after all, this is CarShowSafari.com – cancellations and postponements are occurring nationwide.  From the rescheduling of the large New York International Auto Show from April to September, to the cancellation the small “Corvair Springfest” in Helen, Georgia, car-related activities of all sorts are feeling the effects of the pandemic.

On our “Find an Event” pages, all manner of listings are being updated with “Cancelled.”  As if the virus itself weren’t enough of a worry, our favorite car-guy pastimes are being impacted.

And of course, it isn’t just car-related events that are being hit.   NBA basketball, Major League Baseball, college commencements, weddings and funerals, virtually every large gathering and many small ones.  Restaurant dinner for two?  Only if you like take-out, restaurant dining rooms have been closed.

Held at the Shanghai International Circuit, the Chinese Grand Prix would have been some 800 kilometers from Wuhan, “ground zero” for the coronavirus outbreak.  This is a distance that by February was deemed too close.  But by March, the distance between Wuhan and every other place in the world had shrunk to six feet – the minimum distance it is now recommended to keep between yourself and other persons.