Imagine, if you will, the wide open expanse of the Mojave Desert. It is the first half the 19th century and westward expansion has led pioneers and settlers to head toward the far-off ocean from established ports in the eastern cities of Boston and Philadelphia. There is opportunity in California, if you can survive the trip, but the perils are many and largely unknown to those who venture out. Now, set against this beautiful and dangerous landscape, one of which romantic and horrible tales will be borne for centuries to come, imagine this: a pristine Tesla Model X.

Ridiculous, right? If those sheriffs and outlaws had seen that car in that place at that time, they would have likely assumed extraterrestrial or celestial intervention. And why shouldn’t they?

Our technology, design, and industry have evolved so rapidly that it is often challenging to reconcile the early days of our history with the modern automobile, but perhaps they are not quite so far apart as they would seem on the surface. A great many of the phrases, customs, and conventions we act upon today are borne from days before the automobile, back to when the horse and buggy ruled and the stagecoach was more than the logo on the side of a bank. 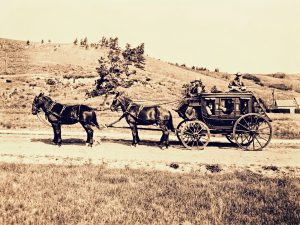 In fact, that very stagecoach is responsible for a phrase that even the most auto-illiterate among us will know all too well.

Thankfully, in today’s day and age, the shotgun seat is nothing more than a right to pick the music and feed the driver hamburgers from paper bags on long stretches of highway. But back then, when outlaws, wild beasts and Native Americans fighting to defend their land from violent intruders were around every bend in the road, shotgun meant something altogether different. Well, almost.

As with everything western, the phrase riding shotgun is actually a romanticized ideal of the Golden Era of Cowboys and, in fact, there are no documented cases of the term being used to play guard to old stagecoaches from the actual period of the outlaws and vagabonds. In reality, the phrase is a product of the Hollywood and literary imagination, with the very earliest example documented in “Ross Will Again RideShotgun on Old Stage Coach”, a short story published in The Ogden Examiner in May of 1919.

Alex Toponce was in the early days the owner of a stage line. He will probably drive the old-fashioned vehicle, while A. Y. Ross, famous in railroad circles as a fearless express messenger and who on several occasions battled with bandits on the plains, will probably ride “shotgun” as he did in the past.

From then on, as with all glorified eras of time well after they’ve passed, the term became a kind of derivative history, a signpost for the westerns pulp books and Spaghettis, until it morphed into the usage we know of today. 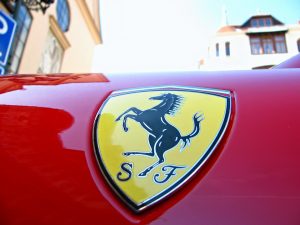 Of course, that symbol of a stagecoach in the midst of a gunfight brings to mind other automotive phrases as well with each whinny and whine of angered, fearful horses, though you’d be more historically accurate to compare the horsepower of modern-day automobiles to the steam engine of the wild west than the horses themselves. We owe that fundamental reference to automotive strength to James Watt, the 18th-century engineer whose last name is synonymous with the measurement of power.

Watt was determined to measure the output of energy from steam trains based on the standard of draft horses. After seriously overestimating the amount of weight over a period of time a horse could sustain, he came to the conclusion that 1 metric horsepower was equal to 735.5 watts. (One mechanical or imperial horsepower was equal to 745.7 watts.) The actual phrase was coined, according to legend, when a man bet Watt he couldn’t build an engine stronger than his strongest horse. Watt performed his calculations and knew how powerful the engine needed to be. When pitted against each other, the engine won out, thus setting a standard for one of the most known terms in the automotive world today, well before Karl Benz and Henry Ford were twinkles in their father’s eyes.

And the relationship between the horse, hard-headed men, and the modern car by no means ends with Watts or even Eastwood. In fact, you’d have to go back much, much further, to an era when all roads led to Rome. It was decreed then, in 1300 A.D. by Pope Boniface VIII, that visiting pilgrims were to stay to the left side of the road. In some places, that has remained a constant for centuries, though certainly not due to the edict of a dead pope. 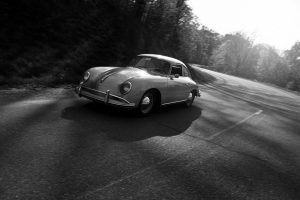 No, in those countries that initially set precedents they would drag around the world, the commonplace rules became law gradually. As civilization, weaponry, and ego expanded, the left-side standard became a way of protection, a chance to draw your sword or ax and attack your approaching opponent with the hand that had been dominant for homo sapiens since the earliest biped. For England and those conquered colonies under British rule, this did not change with time and the eventual movement away from horses and carriages meant only that the vehicle had shifted, and not the custom.

But why the proliferation of the right-handing driving standard around the world if English rule held such sway for so long? According to the article “Left-Right: Why Driving Rules Differ” by Richard Hopper, published in Transportation Quarterly in October of 1982, speed, efficiency and the indomitable draw of the wild west overruled British influence. The early wagons of the United States had no driver seat, and instead, the driver would sit on the left rear horse, in order to control the team of horses with the whip in his right hand. 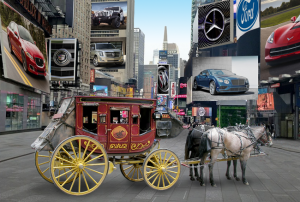 “When two wagons going in opposite directions had to pass on a typical, narrow, unpaved road,” Hopper writes, “the natural tendency of both drivers was to edge their vehicles to the right. By doing this, the drivers could see to their left and avoid banging axle hubs or wheels.” That standard became a law specifically on the Pennsylvania Turnpike between Lancaster and Philadephia in 1792. In 1804, New York became the first state to pass a law ordering right-hand travel on state roads, followed by New Jersey in 1813 and eventually making way for an entirely new type of vehicle in the years to come.

It makes you wonder, then, what sort of unfathomable future of cars, and the world, we are currently designing right now without even knowing it. Yes, a Tesla Model X would make a statement in a tiny western town, too shiny, too quiet, and far too high-tech. But it isn’t as out of place as it might seem. History often isn’t happening when it knows it, and whether cars were designed, dreamed of, or merely fantasy at the time or not, the standard of language, custom, and law was being set into place that would continue to influence them up unto today. The only question now remains, what will come next?