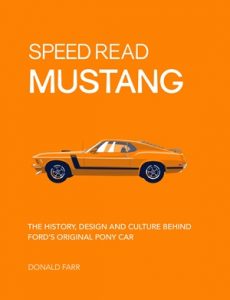 In 2014, as the 50th anniversary of the Ford Mustang barrelled down upon American history, I was racing to keep up. For more than three months, I strained over the history, origins, major players, finances, and statistics that helped to make the Ford Mustang was it was then and now, immersing myself in the story, the people and the car itself day in and day out. Suffice to say that by the time the nearly five thousand word article was complete, I was fairly well-versed in the history of America’s favorite car. 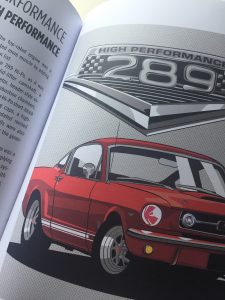 So it says something when a book about the history of the Mustang holds my attention. Mustang, by Donald Farr, part of the Speed Read Collection at Motorbooks, did.

Now, Donald Farr is a master of the Mustang. In fact, his name shows up more than once in my original article and this is far from his first book on the topic. Even for the consummate Mustang enthusiast and historian, however, he brings a lively, unique approach to a well-known story that can capture interest and hold it through the history of racing, unique models, important figures and beyond.

Farr does a remarkable job blending his expertise with the colloquial, casual style of the Speed Reads books. For the Mustang novice, the information is easy to digest, memorable and, most importantly, fundamentally human. He tells the original story of the Fairlane Committee that was nearly disbanded before it even began, the complications of naming one of history’s most important cars and the back and forth bickering of Henry Ford II, Lee Iacocca and the car’s other early architects.

But even if you know all that, even if, like me, you spent months tracking down the specific information on a Dearborn hotel that no longer exists, a historical committee no one ever thought would be worth writing about, this book is still chockfull of yet undiscovered information. 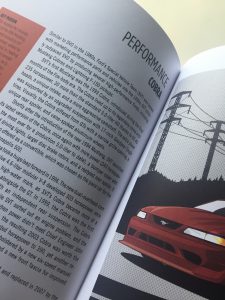 As with other books in the Speed Read series, Mustang is organized into easily-digestible parts and pieces, the history of the original car, racing, specific models, demographics, the whole gamut of unique and important factors that bred the car’s success. Iacocca was no man’s fool and the extent to which he planned, organized and scheduled this car’s future is apparent from the get-go, insight into not only how the Mustang became such an unmitigated success, but how it remained one.

Farr is also a masterful writer. His information is succinct and easy to understand and file away for further use, but he also sets the scene, in that Detroit hotel, in the offices of Henry Ford II and Lee Iacocca, on the tracks in Europe and America, in the mad and wonderful mind of Carroll Shelby. Not only does he explain why and how the Mustang became the phenomenon it remains today, but he makes us care about.

As an enthusiast, reader, and writer, I am a huge fan of the Speed Read books. I think they take the overwhelming history of the auto industry and break into pieces that the lifelong enthusiast and the passionate novice can enjoy in equal measure. Donald Farr’s Mustang is no different. It is accessible, incredibly researched and a truly joyful read for all. Whether you drive Chevy or Ford, whether European or America, this is a book worth reading.