In the days of modern engineering, when automakers scramble to develop the next great alternative energy source and set their sights on Mars, it seems every other vehicle has a thousand horsepower. When the Bugatti Veyron first came out in the early 2000s, it was a remarkably powerful vehicle, with top speeds of well over 400 miles per hour, and even it didn’t hit the 1,000 horsepower mark.

Now, it seems most of the world’s performance automakers are well into the game. Ferrari has several vehicles that max out over four figures, Bugatti, of course, Lamborghini, Koenigsegg, Mercedes, McLaren, and Porsche all produce some form of race or track-ready vehicle that is limited only by the melting point of the tires. Even the new GMC Hummer EV is in on the game, with claims of over 1,000 horsepower, though those remarks have been challenged by skeptics.

Humans are already fast. Usain Bolt can run over 23 miles per hour. Although many in the animal kingdom can beat that, our long distance stamina means we’re still incredibly speedy and we won’t tire easily. But for as fast as we go on foot, we’ve constantly been searching for the next great speed enhance. First it was horses, then cars, then rockets. We dream of hyperspeed and continue to push the limits on what fast really is.

So with all of that taken into consideration, it is little wonder that the first vehicle to claim over 1,000 horsepower was not the Bugatti Veyron. It was not some F1 monster engineered in a sterile room. It was not the product of Elon Musk’s overactive imagination. It was the Sunbeam 1000 hp Mystery, and it raced in 1927. 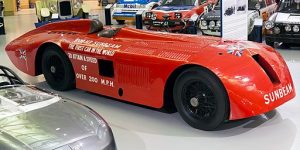 Now, like all great number-boasting vehicles, there is some conjecture as to whether or not the Sunbeam 1,000 hp Mystery actually did have 1,000 horsepower. Records actually put it closer to 900 when tested, but there is no question that it was the first vehicle to achieve 200 miles per hour, a record set in March of 1927, at Daytona Beach. It was the first non-American vehicle to set a record there, and it set one hell of a record.

The Slug, as it was also called, was built by the Sunbeam car company from England, and in true madman mechanics, it was powered by two aircraft engines, one located in front of the driver and one behind. As the modern day machines can attest, those kinds of speeds can kill tires in an instant, and the tires on the Sunbeam 1,000 hp mystery were meant to withstand only about three and a half minutes of driving over 200 miles per hour.

Three and a half minutes is more than enough to set a record.

Unfortunately, though the speeds were great, the times were not. After the Great Depression, Sunbeam Motor Car Company fell into receivership and was sold to the Rootes Group after decades of producing bikes, motorcycles, cars, and Grand Prix racers. The name has appeared on myriad vehicles through changing hands for decades since.

While the Sunbeam 1000 hp Mystery remains little more than a footnote in automotive history, its impact reverberates today. After all, it was not a Ferrari that first drove 200 miles per hour, not a Ford or a Lamborghini or a Porsche or a Mercedes. It was not a heavy hitter in the early automotive field nor yet a prince of performance. It was a Sunbeam 1000 hp Mystery from Wolverhampton, England. And it set the future into motion—at speeds no one had ever seen before. Now there’s something to be said about that.