This Week in Motorhead History: The Death of Ernie Kovacs

Nearly sixty years ago, in the early morning hours of January 13, 1962, pioneering television comedian Ernie Kovacs crashed his car on rain-slick roads at the corner of Beverly Glen and Santa Monica Boulevards in Los Angeles.  Driving alone, the 42-year-old Kovacs was killed as his car spun into a telephone pole.

Kovacs’ death is significant on two levels.  First, his innovative television work remains relevant today, recognized for its inventiveness and for its influence on so much that has followed, from Laugh-In to Saturday Night Live, and it is credited with inspiring performers such as Chevy Chase and David Letterman.  Second, Kovacs’ crash was the highest-profile accident involving a Chevrolet Corvair, a car that would soon become labeled as “Unsafe at Any Speed” in Ralph Nader’s book of that title. 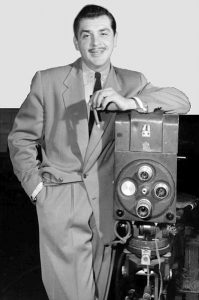 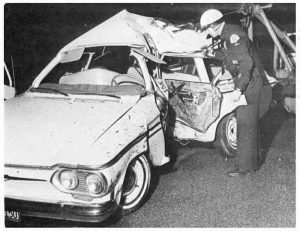 In his hometown of Trenton, New Jersey, Kovacs began on radio before moving to television in Philadelphia.   His Philadelphia broadcasting stint included multiple shows, one of which was a cooking program called Deadline for Dinner.  Kovacs quickly nicknamed it Dead Lion for Dinner.  His Philadelphia morning show, Three to Get Ready (on channel 3), launched in 1950, and is given credit for inventing morning television, inspiring NBC to launch the Today Show just over a year later.

Early on, Kovacs began experimenting with visual effects such as superimpositions and trick camera shots, the most famous of which may be the “tilted room” silent sketch with one of his on-air personas, Eugene.  Kovacs improvised such things as kaleidoscopic effects, underwater cigar smoke, and gags combining visuals and music.

Spontaneity was one of Kovacs’ stock-in-trade, once being quoted as saying “Every idea I ever had is based on the fact that it is 2:30 and there is a production meeting at 3:00.”

By the late 1950s Kovacs was a star of television and movies, although not necessarily among the most popular because his undisciplined humor often led to uneven shows.  But he was highly respected in the show-biz community, which brings us to that fateful night in 1962.  Kovacs was attending a party given by film producer and director Billy Wilder for television comedian Milton Berle and his wife, who had recently adopted a newborn baby boy.  Among the attendees were Dean Martin and his wife, Yves Montand, Lucille Ball and Gary Morton, Jack Lemmon and many more. 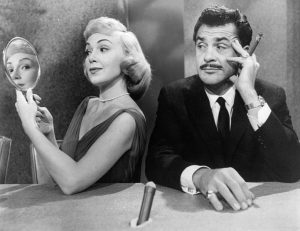 Kovacs drove to the party in his white Rolls Royce, and his wife, singer and actress Edie Adams, had driven there in the couple’s white Corvair station wagon.  Around 1:00 AM, Ernie decided to leave the party and drive to PJ’s, a joint in Hollywood, to meet a friend for a nightcap.  It was raining and so he chose to take the Corvair, telling Edie to drive “the other heap” home.  On his way out he offered a ride to Montand, who declined.

Kovacs’s motto was “Nothing in Moderation.”  He had been working long hours.  He was in the midst of a battle with the IRS over unpaid taxes.  He had spent the past several days shooting a television pilot for Screen Gems while simultaneously working on his seventh television special for Dutch Masters cigars, which he was writing, directing, starring, and editing.  He’d been drinking and partying.  It was raining, and he was driving too fast. 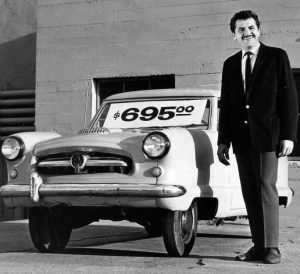 At the corner of Beverly Glen and Santa Monica Boulevards, while trying to light another of his seemingly-endless supply of cigars, Kovacs lost control of the car, which spun off the road and struck a power pole broadside, drivers’ door first.  It was a massive impact, and Kovacs was dead before help arrived.

Years later, an interviewer tried to goad Edie Adams into blaming Kovacs’ death on the design of the Corvair, but she was having none of it.  She blamed instead his fatigue, his alcohol consumption, his speeding, and road conditions.  Edie Adams never stopped loving Ernie, and she worked tirelessly and ultimately successfully to pay off his estate’s substantial debts.