Top Gear vs The Grand Tour: Who’s the Winner?

When Jeremy Clarkson was given the sack by the BBC, it resulted in there being two high-concept car-related television programs where previously there had been one.  Clarkson took his co-presenters Richard Hammond and James May off to Amazon Prime where they, along with longtime collaborating producer Andy Wilman, created The Grand Tour.  The BBC filled the vacancies at Top Gear by hiring Matt LeBlanc, Chris Harris, and Rory Reid as presenters.  With the benefit of having now seen two series each from The Grand Tour and from Top Gear, we are prepared to declare which one is best.

But first, a qualification: For the purposes of this comparison we are ignoring the first post-Clarkson go-round at Top Gear, where Chris Evans led a diverse and excessive group of presenters and was, in the view of critics and the audience, annoyingly bad at it.  Evans was and continues to be a popular and successful radio and TV broadcaster in the UK, but his brand of cheek and irreverence failed to come through in the Top Gear environment.  There was no apparent chemistry among the hosts, and the entire show’s pacing and energy was sub-par.  Evans left the show after this one series and LeBlanc, Harris, and Reid moved up.  It is this trio’s work that we will be comparing to that of Clarkson, Hammond, and May. 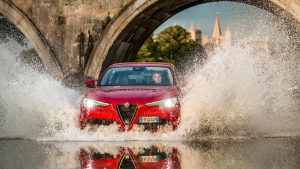 With that series set aside, it becomes The Grand Tour that was first out of the gate.  Here at CarShowSafari.com, we reviewed the premiere episode in November of 2016, and while we found plenty to criticize, we also found a lot to like and we predicted that the show might prove in time to be “a new pair of comfortable old driving shoes.”  We disliked, for example, the instantly-tiresome routine of introducing guest stars and then having these celebrities “killed” en route to the studio.

Clearly, we were not alone in gagging on this running gag, because for the second series it was gone, replaced by genuine in-studio appearances by pairs of invited guests, guests who took timed laps in a format not dramatically different from the “Star in a Reasonably-Priced Car” segment on the old Top Gear.

And we liked the studio, which is a massive and eye-appealing tent erected in a variety of settings.  Unfortunately, for the second series this studio was no longer transported to different locations, but instead stayed put, apparently adjacent to Clarkson’s home.  This change was perhaps dictated by logistical issues or budgetary considerations, and the view of Clarkson’s pasture is pleasant enough, but something was lost by no longer taking the show on the road.

There can be no disputing that the obvious chemistry between the hosts and the irreverence that they display was a big part of Top Gear’s success, but in making the move to The Grand Tour it now appears that the producers think more highly of these factors than is warranted.  The Grand Tour, to a very significant degree, has lost sight of the fact that it is a car-related show at its foundation and appears to think that it is the Clarkson-Hammond-May show.  Far more time is devoted to the hosts simply gabbing and bickering, which, while it was always an element of Top Gear, is simply excessive on The Grand Tour.

And when the show does get around to car-related material, much of it is conducted on the dreadful “Eboladrome” course, which looks like it was selected after the entire show budget was spent elsewhere.  To their credit, for the second series they got rid of the hackneyed “American” portrayed by retired NASCAR driver Mike Skinner, but the replacement, an unidentified female driver, is Top Gear’s Stig without even the Stig’s scant character development.  When the guest stars take their timed laps, they do so on a circuit of mixed pavement and gravel that appears more like an unfinished road-building project than a rallycross course.  Yes, the Top Gear track was and is an airport runway and taxiways, but at least it appears finished.

So, after two full series of The Grand Tour, we have come away with a mixed review: The bright spots continue to make it required viewing, but the low points are exasperating.

The post-Evans Top Gear came to the starting line with Matt LeBlanc as the lead presenter, a choice that seems a bit odd given that he is an American now anchoring a solidly British show.  But LeBlanc clearly has a stronger screen personality than Harris or Reid, likely due to his extensive television acting experience (yes, this is Joey Tribbiani and the Man with a Plan we’re discussing here), and while the team chemistry is still far short of that demonstrated by the Clarkson-Hammond-May triumverate, it has improved through the course of the two series so far.

What works in favor of Top Gear is that it has not forgotten that it is a car show.  In the second series, which began earlier this year, the three presenters have individually and collectively interacted with an appealing variety of vehicles in an appealing variety of ways.  A recent episode featured LeBlanc chasing down a NASA jet with a Dodge Demon, Reid putting a Hyundai hot hatch through its paces on the test track, and Harris and LeBlanc cheerfully “testing” a Citroen 2CV in the French countryside.  The variety of cars and variety of settings and variety of activities was, well, pitch perfect.

What Top Gear needs to do, however, is ditch the bargain-basement leaderboard they use for their official lap times.  It’s almost embarrassing to watch the hosts fumble with the magnetic strips that have to be moved about in order to post a new time.  Although, at least now they are pre-printing the drivers’ names on them, so only the times are written in the scribble of the presenter.

On balance, as the second series of the retooled Top Gear winds down, we find that we like it better than The Grand Tour.  And we want to like The Grand Tour, and not only for its inspired title.  But until The Grand Tour remembers that it is about cars and not about the hosts, Top Gear remains on top.