The Legend of Zora

Zora Arkus-Duntov was many things. The son of Russian Jews during the rise of communism, Arkus-Duntov was a fast thinking, smart talking, brash sort, who reveled in upstaging authority just past the point of acceptable. When he set his mind to a task, it was completed, no matter who or what stood in his way, be them military powers or the upper management of a major American automaker.

Call it fate or dumb luck, but after a series of early business starts, including in military production and street racing, the young man who had escaped Hitler’s reign in Europe through a saga so unbelievable no Hollywood producer would finance it, ended up at the 1953 Motorama in New York. There, not entirely uninitiated into the world of race and sports car, Arkus-Duntov found himself staring down the grille of the Chevrolet Corvette. Then, a bulbous and ill-rendered competition to the sports cars of Europe, the Corvette did little to sway the American public. It was underpowered and uninteresting.

Though aesthetically unique from the enormity of its American counterparts at the time, the Corvette did little to mark itself above the European sports cars that had fascinated the GIs stationed overseas. In a mark of its laughable performance, the original Corvette had a zero to sixty run time of eleven seconds. First production began on June 30, 1953, and from the start it appeared as though the Chevrolet Corvette was a project best to be forgotten about and written off as a failed flight of fancy.

Zora Arkus-Duntov did not agree.

He had seen the Corvette at the Motorama show, he wrote to the chief engineer at Chevrolet, Ed Cole. The car was striking, but the engine was not. He attached a technical analysis paper about how to determine the top speed of car, which so impressed the head honchos that by May 1, 1953 he had found himself with a job as an assistant staff engineer at GM.

December of that year brought about a memo which would fundamentally alter the future of the Corvette, Chevrolet, GM, and the auto industry as a whole. In “Thoughts Pertaining to Youth, Hot Rodders and Chevrolet”, Arkus-Duntov outlined his fears regarding America’s kids, and the importance of a first car on a life-long car ownership loyalty. As the hot rod hobby was in full swing, Chevrolet had much to be concerned about. To Ed Cole he wrote,

“A young man buying a magazine for the first time immediately becomes introduced to Ford. It is reasonable to assume that when hot rodders or hot rod-influenced persons buy transportation, they buy Fords. As they progress in age and income, they graduate from jalopies to second-hand Fords, then to new Fords…Should we consider that it would be desirable to make these youths Chevrolet-minded? I think that we are in a position to carry out a successful attempt.”

Arkus-Duntov feared, correctly, that ignoring the youth market was making Ford buyers out of entire generations of consumers. If they didn’t find a way to compete with the hot rodding kids, who “[knew] Ford parts from stern to stern better than Ford people themselves,” then they were practically handing over their entire demographic of buyers to the competition. What they needed to do, he argued, was race. Speed was the key to the heart of the next generation.

Miracle of miracles, or perhaps they saw the writing on the wall, Chevrolet listened to him, producing a V8 Corvette that undoubtedly saved that first, anemic attempt at the car. In 1956, he took the ‘Vettes racing at Sebring and Daytona, his modified V8 Corvette reaching over 150 miles per hour, setting the flying mile record, and earning him the position of Corvette engineering coordinator. 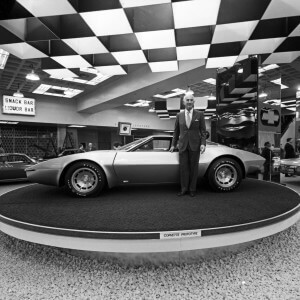 This provocative machine represented one of his last and greatest hopes to build a production mid-engined Corvette.

He wasn’t done, not by a long shot. The 1956 Corvette came with three engine options, emitting 210, 225, and 260 horsepower respectively. In 1957 he was instrumental in the development and production of a Corvette with a fuel injection option, build by another Corvette engineer, John Dolza. The fuel injection – which he pushed harder than Lee Iacocca pushed the Mustang less than ten years later, would earn Corvette the superlative of being the first production-based passenger vehicle to reach 283 horsepower.

Arkus-Duntov would continue to be the Corvette’s greatest advocate for decades to come. He was promoted to director of high performance vehicles, took the Corvette racing at every chance he could, modified and remodified in efforts to challenge the ability of the little white and red car which had so caught his attention. When racing bans made him ineligible to drive, Arkus-Duntov found loopholes to stay involved.

Fifteen years after coming to work for Corvette, he was finally promoted to his dream position – Chief Engineer of the Corvette. It came at a time when muscle cars reigned and design and power rivaled one another for loyalty, with the pony cars making room for stronger, beefier engines and styling that would follow.

Arkus-Duntov wanted the Corvette to go in another direction. Still aware of the Corvette’s perpetual rivalry with Ford, he yearned for a mid-engine ‘Vette to challenge the Ford GT. For generations, he tried to pass the mid-engine idea, but little more than concept cars ever came of it. As rumors swirl of a mid-engine Corvette in today’s modern age, we must think back to what Arkus-Duntov would have said at the sight of today’s car world.

Though Arkus-Duntov retired from GM in 1975, he continued to promote his beloved Corvette, attending motor shows and events, celebrating the one millionth Corvette at the Bowling Green Assembly Plant in 1992. He passed away in 1996 at the age of 86, never seeing the great phoenix rising of his beloved car, and most certainly, never knowing that Corvette would one day come forward with plans (still just plans…) of a mid-engine Corvette, and call it the Zora.

Arkus-Duntov did a great many things for Chevrolet, and for the Corvette. But it is his earliest years that make the biggest impact on the automotive world we know today. Without the presumptuous letter from a young car enthusiast, the Corvette would likely have been scrapped. Chevrolet would not have moved forward with plans to reach America’s youth – ten years before Ford did the same with the Mustang. Chevy would have fallen behind. They would have been left behind.

The Corvette gave Americans something to believe in. American power, American style. It became an icon associated with a country that, for so long, had been unable to produce a sports car to rival those in Europe. Thanks to Arkus-Duntov, and his fearless loyalty to the little Corvette that could, a underpowered, red and white sports cars, with a first production run of only 300 cars, June 30, 63 years ago, went on to become one of the most influential, powerful, record breaking cars in history. There is no more fitting homage to his legacy, than the car he always wanted.

Author’s Note: Unfortunately, plans for the Zora ZR1 remain unfinalized, and have for some time. We hope this one comes through as much as Zora did, but Chevrolet might just have a stick up their tailpipe about the mid-engine ‘Vette.

*Tom McCahill was automotive journalist(1950s) and was also referred to as “Uncle Tom” McCahill.