The Horses Beat the Cars 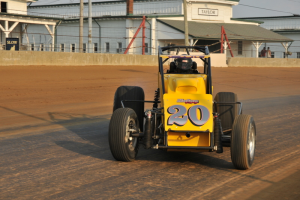 In our recent story about indoor auto racing in Syracuse, New York [Honey, I Shrunk the Race Track], we noted how few one-mile dirt tracks remain in operation, when decades ago such tracks were part of the same National Championship as the Indianapolis 500.  This May, one of the three remaining dirt miles that still plays host to auto racing will bite the dust.  (Yes, we went with the dirt pun.  Sorry.)

In one sense, though, the announcement shows the track’s use coming full circle.  It is not development pressure that is ending auto racing at the Indiana State Fairgrounds, it’s horse racing.  The plan is to cover the dirt oval track with crushed limestone to create an all-weather surface for harness racing, and to utilize the infield (where harness racing currently takes place on a smaller oval) as all-weather parking for the annual fair.

The United States Auto Club (USAC) issued a statement that indicated that discussions had taken place for some time to try to keep auto racing at the fairgrounds.  That statement went on to say that, “The economics of the horse industry and their desire to use the one-mile track year-round instead of the half-mile currently in the infield won out in the end.”

The Indiana State Fairgrounds is often referred to as a historic place, and correctly so.  Drivers the likes of A.J. Foyt, Al Unser, Parnelli Jones, and Mario Andretti all won there.  One of racing’s original barnstormers, Barney Oldfield, became the first person to record an official average lap speed of 60 miles per hour or more – the original “mile-a-minute” – on the track in 1903.

But all the racing history of the Indiana State Fairgrounds will soon be just that – history.  The last Hoosier Hundred is set for May 23rd.  And that, according to a statement released by the Indiana State Fair Commission, will be that.  The statement read in part that the commission “recognize(s) the storied history that this track has played in auto racing, [but] is pleased that the track conversion will improve safety, enhance the guest experience and allow for the continuation of harness racing.”

Racing fans have launched a petition at Change.org, asking Indiana Governor Eric Holcomb to keep motorsports at the fairgrounds, but sadly, we expect that effort to be a DNF.