The History of the Corvette: In Media Res

There are few production vehicles created by American automakers that hold the same value as the Chevrolet Corvette when discussing performance, legacy, and beauty. While limited-run models and racing vehicles have and continue to hold council in the great Parthenon of America’s best cars, the Shelby Cobra, the Ford GT, there remains a sort of unattainable magic around them, vehicles that are not for the every driver, not for the amateur racer.

The Chevrolet Corvette is different. It has always been different.

And now, with the upcoming unveiling of the 2020 Corvette on July 18th, the very first production mid-engine Corvette in history, it will be different in a whole new way.

The Corvette we know and idolized is the result of hard work, vision, and the tenacious, if sometime tedious push of Zora Arkus-Duntov, the mastermind behind fuel-injection, modern marketing tactics, and the mid-engine Corvette. 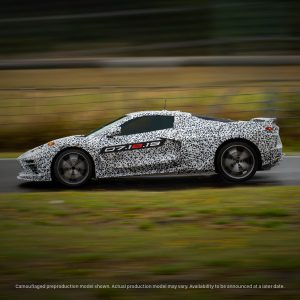 Arkus-Duntov, like the rest of the world, never got to see his mid-engine Corvette produced, despite generations of America’s favorite sports car passing through the doors at GM, each more powerful and capable than before. It wasn’t without trying, and with each new model, Arkus-Duntov pressed the Chevrolet powers that be again, make a mid-engine car, he campagined, this will be America’s greatest machine.

He died in 1996 at the age of 86, well before this new C8 Corvette was a twinkle in the eyes of the executive powers, but his legacy plays more than a passing role in the promotion and unveiling of this new model. In fact, the teaser video for Thursday night’s unveiling shows clips of him driving some of the most incredible Corvettes ever produced and it is his voice asking,

“Is your seatbelt fastened?”

The video is rife with images of those could-have-been mid-engine Corvettes, the 1964 XP 817, the 1976 XP 882 Aerovette, interspersed with racing, with rocket launches, with innovations in speed, engineering, and design, all of which come together to create a universal message.

The 2020 Corvette C8, the first production mid-engine Corvette for the masses, has been a long time coming. 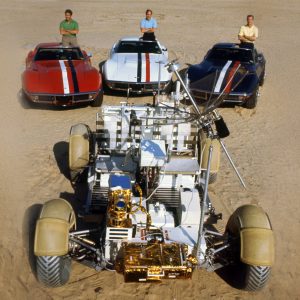 Astronauts James Irwin, Alfred Worden, and David Scott (L-R) with their 1971 red, white and blue Corvettes, and the Lunar Roving Vehicle to be used in the Apollo 15 mission.

It has been built on the back of every innovation, of every scandalous dare-to-dream moment, of every it-can’t-work blueprint to come before it and, the video implies, it will be worth the wait. There is something to be said that the unveiling is scheduled for the same week as the 50th anniversary of American astronauts landing on the moon.

Is GM exploiting their overly enthusiastic fanbase for this relatively niche release? Who cares. Whether fans watched prototypes fail for years or they simple mired themselves in the history of one of America’s greatest cars, this victory is long overdue. A mid-engine configuration would secure the Corvette among the greatest performance vehicles of history, a position it earned generations ago, place it firmly alongside the Ferraris and the Lamborghinis and the McLarens, a modern American supercar, as defined by Chevrolet, itself, with an unapologetic roughness and an available 755 plus horsepower under the hood.

Thursday night will go down in the automotive history books, a long-overdue finish that will hopefully deliver on its decades of delay, a movement forward for one of the car companies that has survived it all, and a promise that power doesn’t have to come with finish or panache, as all those European brands Zora Arkus-Duntov once wished to compete with. Sometimes, power, true power, power that puts you right in the thick of it and dares you to finish the race in style, just comes with a little boldness and that American courage to try something new.

Zora would definitely approve of that.