The Future is Here–and It’s Faster, Greener and Smarter Than We Expected

Earlier this month, at the Frankfurt Auto Show in Germany, Lamborghini unveiled the limited edition hybrid super sports car, the Lamborghini Sián. The Lamborghini Sián is a future that not even the combined genius of Henry Ford, Caroll Shelby, and Ferruccio Lamborghini, himself, could have dared to dream. It is, at once, a staggeringly fast performance vehicle, excessive in a way only Lamborghini can be excessive, and also deeply innovative, advanced, and intelligently connected. The Lamborghini Sián is the automotive equivalent of the hot jock from high school getting a full ride to Caltech. 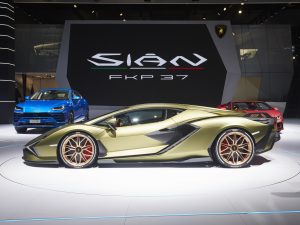 For those of us who have loved and appreciated the Lamborghini-brand indulgence of bold lines and bigger and bigger engines, the beauty and speed of this vehicle are easy to access. The Sián is, at its core, a Lamborghini in all ways.

But when we pull the camera out a little, there’s so much more to it, and that more, despite being inaccessible to nearly every person alive right now, will have a rippling effect on the automotive industry for years to come–one we may not know the full extent of until well after the gears have started to turn.

As we’ve written about in the past, one of the keystones for alternative energy’s success in the mainstream automotive market was alternative energy’s success in the exclusive, high-end, automotive market. From the aspirational Tesla to the win-the-lotto-and-invent-PayPal BMW i8 and Porsche 918 Spyder, the supercar and hypercar movement toward hybrid and all-electric energy has spurred a similar evolution in cars like the Nissan Leaf and Chevy Volt and Bolt models.

The Sián takes it a step further than that. It is the first car to use a supercapacitor, which is a form of capacitor that has the ability to hold a higher capacity of charge but with lower voltage limits, for hybrid energy use. It can store anywhere from 10 to 100 times more energy by mass than other forms of capacitors, is capable of both accepting and delivering energy faster than batteries, and can undergo the recharging cycle more times than rechargeable batteries.

All of that is to say–Lamborghini is out here doing the science.

What does that look like to brains that aren’t capable of translating that kind of horsepower into real-world usage? It looks like 0-100 kilometers (about 62 miles) in 2.8 seconds. It looks like a top speed of 350 km/h–about 217 miles per hour. And while that still doesn’t rank it as one of the top ten fastest cars of all time, (for 2019, the Lykan Fenyr Supersport comes in number ten on the list at 245 miles per hour and the Hennessey Venom F5  comes in at number one, with a staggering 301 miles per hour) it does make a very loud, very definitive statement. 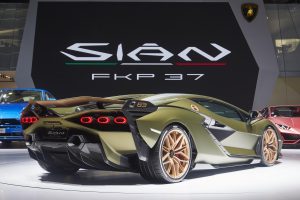 Now, we won’t exactly see the Lamborghini Sián on every street corner. In fact, Lamborghini produced just 63 units–an homage to the company’s founding year–and all of them are sold and accounted for. But this vehicle doesn’t just make a splash because of this vehicle. Where Chevy and Ford are struggling to keep up with modern automotive demand, safety regulations, and union protests, Lamborghini can take the time, money, and resources to craft alternative energy vehicles the world has never seen before–but will almost certainly see again.

Scientific advances and artistic evolution have long been shared across industries–to great success. The future of the automotive industry will almost definitely be built, at least in part, by what Lamborghini has achieved here this year.