While other auto makers wanted to design luxury cars, Henry Ford designed a car that anyone could afford. Here he is standing by that very car.

In what would become one of the broadest reaching, longest running, most influential car productions of the 21st century, the Ford Model T was released on this day, October 1, 1908, and would go on to turn the existing car industry on its head.

Ford was not the first, and nor was the Model T Ford’s first, but the revolutionary design of production, and the car’s accessibility and affordability would make it a staple for the forward motion of the industry. Model Ts would become the everyman’s car, and turn ownership of an automobile that boasted production quality and reliability into something the average American could aspire to own.

Much of this everyman quality can be attributed to the historical assembly line, which would change, not only the automotive industry, but the whole of global industry, lower production costs and increasing the time it took to put out products. Since Ford was no longer paying for hand built cars, they could afford the price the Model T within the range of the average consumer. The quick production also made for quick fixes when cars needed to be worked on, thus making another element of car ownership accessible to the middle class. 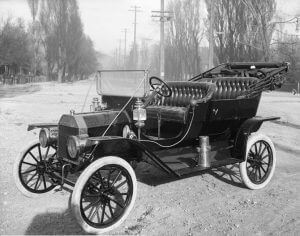 Though basic by the standard of even the lowest ranking Ford today, the Model T made advancements beyond simply production, but speed, technology and engineering. It was a car that came before its time, but also lent itself to a fundamental mindset change within the automotive industry. Were it not for the Model T, and the innovation at Ford, the car world we know today would likely look very different.

In May of 1927 the 15th million Ford Model T rolled off the track, the same year the Model T was discontinued from Ford’s lineup, amid falling sales, due to increasing competition, changing consumer needs, and a movement forward of the very industry the Model T helped to create. While the cars on the road bear no resemblance to their great-great-granddad, there is no denying the Model T’s influence on Ford, the auto industry, and the world as a whole.