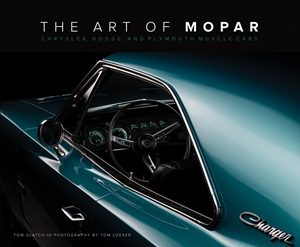 The Art of Mopar

Your first instinct, when you open The Art of Mopar, by Tom Glatch, is to dive into the deep end of Tom Loeser’s incredible light-painting photography. It is a good instinct, for the artwork is, if possible, even more beautiful than the cars all on their own, but if you limit yourself to window shopping the bright expanses of American flank and muscle, you are missing out on something truly spectacular.

While an obvious passion for the Mopar machines of years past – and even up to the modern day – cuts clear through Glatch’s writing, the book goes much further than that. Across the expanse of 25 of Plymouth and Dodge’s most incredible performance models through history, from the 1963 Plymouth Sport Fury Super Stock 426 to the modern-day more-beast-than-car Challenger SRT Hellcat, Glatch goes so much further than simply telling the reader that something happened. He asks why.

After all, the evolution of car styling seems, on the surface, simple enough. Cars change and move to fit the times and eventually we end up where we are today. Five minutes into The Art of Mopar and the conception of simplicity and style is fundamentally cracked. It is so much more than the act of a single designer in the city. It is so much more than a new racer tearing up the track. Design and evolution and the passage of time are interconnected on a far deeper level, one the reader finally gets the chance to explore in this book.

Glatch does this with many tools at his disposal. In addition to Loeser’s striking photography, he incorporates vintage advertisements and research taken from articles and magazine publications written when these new cars first hit the market. This combination of techniques and tools helps to put the reader back into the world of that car, perhaps understanding that the automotive industry was about to fundamentally shift, or perhaps sitting on the precipice of something no one knew was about to change history for good.

And with each car, he digs deep. Rather than regurgitating information, facts and figures, statistics and sales, Glatch explains why and how. Who were buying muscle cars, when did the insurance premiums kill the performance car sales, what racers, advertisers, sellers, and influencers helped to bring these cars into the world and how did each of their influence impact designs and styles that Americans and the world continue to love today? 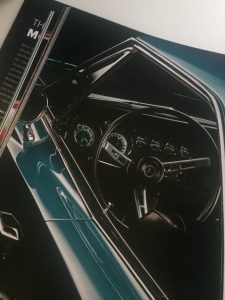 It is at once as large as the history of America – involving the Flower Power movement, the press for more regulation in Washington, the rising cost of gasoline, the white-picket-fencing of the Baby Boomers – and as small as the Mopar models themselves, as a singular wing, as a curve, as a stance. As times changed, these cars changed, and as these cars changed, the times changed. Tom Glatch helps to understand exactly why.

And he does so in a connective, communicative tone that makes the reader learn by accident, too involved in reliving an era of important change and excitement and passion and speed or enjoying living it for the first time. He is at once an expert and a communicator, and the reader will finish the story feeling both hopeful and smarter, without even realizing it.

But powerful and potent as the words are, the story would be incomplete without Loeser’s master hand behind the lens. Each new angle, each sharp contrast of American muscle bright and velvet-smooth black, evokes a sense of motion and movement – through time and space and through the pages of history. Loeser captures the sense of unbridled power inherent in each of these cars and he returns it to the reader in its true form, brilliant, stark, an animal ready to strike at any moment.

The combination of Glatch and Loeser’s efforts makes for a book that is both large and small, about one detail of the auto industry and a history of the world as a whole. It educates and stimulates, answering questions before they are asked, all while adding a human quality to the numbers that so often make up the automotive world.

And while the book ends in the modern day, right up to the edge of history, it leaves the reader with the sense that this isn’t it, that there is so much more to come for these powerful, controlled little muscle cars, that despite all they have weathered, their story is far from over. We should only hope that Tom Glatch and Tom Loeser are the ones to cover it when the time comes.