The All American Ford Falcon

Towards the end of the 1950s, when keeping up with the Joneses had worn off with post-war bliss, and America was reassessing their bigger is better mentality, Ford came to a conclusion. It wouldn’t do, they realized, to continue producing cars solely for the benefit of outshining thy neighbor. The larger and more luxurious, and therefore profitable, models, which had been the thought process behind most of the cars produced by the Big Three up until then couldn’t last.

The times were changing, women were working, and families could no longer manage with a single enormous Buick or Chrysler glinting in the company parking lot. It was an era that would see the end of Hudson, Packard, and DeSoto, as those who did not sense the changing of tides suffered in the new age of American Automobilia. In order to survive, car companies needed to adapt to what the American public wanted. 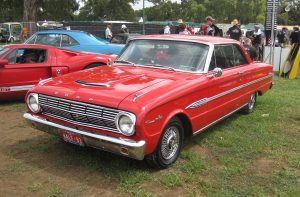 And what the American public wanted was a little foreign invasion. The rising success of the Volkswagen Beetle, and increasing interest in Toyota, with other Japanese compacts soon to follow, made the choice clear. They needed small, dependable, inexpensive cars, the very antithesis of what had been a staple of American Auto from its incarnation.

But if the times were changing, so were automakers, and before long America was privy to the Plymouth Valiant, the Chevrolet Corvair and, on this day September 2, 1959, the Ford Falcon.

Before it would go on to become the less attractive older sister of the Ford Mustang, following just four years later, the Ford Falcon was an important, stylish and successful model in its own right. There would be three generations of Falcon, spanning the 1960s, as well as the singular 1970 ½ model.

From 1960 to 1963, the Falcon came with eight mix-and-match options of body style as well as three transmission options and three engine options, one of them the rare V8, which ran in limited quality, along with the convertible option for the First Generation, in 1963 ½. Variants of the convertible and V8, these Falcon Sprint Cars, would go on to be used as the basis for the Ford Mustang in 1964 ½, a car that remained nearly identical mechanically, but whose aesthetics and style would change the face of the American auto industry. 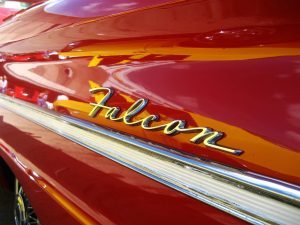 This was to be considered a height of the Falcon’s success, most especially in the form of the 1963 Sprint convertible. While fairly limited in its production, the 1963 Falcon was optioned with the V8 engine, and Ford began to move away from the budget mindset, introducing details and trim that would attract more buyers and move the car to a more respectable echelon.

The second generation of Falcon, lasting just from 1964 – 1965, would suffer for all that it had inspired, trying to battle the success of the Mustang in youth markets and finding it challenging. The Sprint package, which offered a V8 and changes to the suspension and exhaust, could offer nothing not purchased with a Mustang, and so the line was discontinued. For the third generation, the Falcon underwent styling changes, basing it on the shorter platform of the Fairlane. It underwent certain safety and performance modifications, but the car simply could not manage to keep up with incoming safety requirements, and sales were dwindling.

In 1970 Ford gave the Falcon its swan song, transferring the name to the Fairlane mark and calling it the 1970 ½ model, available in three body styles. It was available with a series of performance options, though Ford knew it would soon be replaced by the Maverick. Unable to remove itself from the shadow of its siblings, the name went down in history in 1970, after only a decade.

It is difficult to disentangle the Ford Falcon from the Mustang it would eventually help create, but perhaps we should do our best to try. This compact and sporty car was one of the first of its time, a bastion of American Automakers changing of ways, a telltale sign of the future success of small and foreign cars. It is important in that it revolutionized and created the pony car, but also for the simple and accessible presence it possessed in itself, a mighty little car, with all the options, a dash of style, and a whole lot of will to survive.