True car enthusiasts love and respect cars/trucks of all forms.  Some happen to be particular towards certain vehicular classes.  I love all cars, whether it’s an exclusive exotic or a 1000 horsepower Honda Odyssey (yep, that exists), however I have always had a fascination with muscle cars.  They’re not the most glamorous cars, nor are they at all sophisticated.  There’s little elegance about them and they’re not even the fastest kids on the block.  Their appeal doesn’t come from flawless execution or blistering lap times. The questionable attraction steams from the affordable performance, aggressive good looks, exuberant driving characteristics, absurd engines, and that mesmerizing, signature V8 sound.

But enough about my weird infatuation with muscle cars.  If you’re at all like me and have at least a small obsession with muscle cars, then I would highly recommend visiting Lake George, New York during the annual Adirondack Nationals car show.  This show takes place on the weekend after Labor Day at Fort William Henry in the beautiful Lake George Village.  The fort is situated directly on the southern shore of the lake, and features a grand hotel, two motels and 18 spacious acres of land.

This year’s show will run from September 8th to the 11th.  The Adirondack Nationals is utopia for anyone who likes classics, muscle cars, and hotrods.

I’ve been going to this show for six years now.  The first time I went was the beginning of my junior year at Clarkson University.  One of my best friends from school, (and fellow contributor to this site) Chris Barner suggested making a weekend trip of it.  I was blown away by the scope of the show, and after that first visit, I was hooked.  As with most great ideas, this was not planned, nor was there much preparation.  I’ve gone every year since.

You will immediately notice two things upon entering the village during this weekend; Lake George is absolutely beautiful, and the entire town is overrun by muscle cars. One of the very first cars I see is a Plymouth Superbird cruising down the main strip.

The Superbird is one of the rarest and most iconic muscle cars and I had never seen one before.  I’d call that a great start. We’ve since had the hilarious 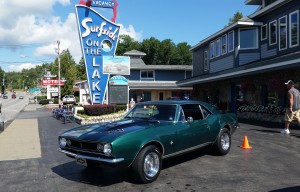 this is one of the very rare occurrences when watching traffic is fun.  The main strip is lined with small hotels, motels, novelty shops, and restaurants. Here’s the crazy part about the Adirondack Nationals; the best part isn’t even the actual show.

While walking around the village, you’ll notice every parking lot is filled with muscle cars.  This is because the people that didn’t register in time for the show still show up with their cars.  This means that every single parking lot is its own mini car show.  All of the cars that didn’t make the show are still show cars, so every lot around town is worth walking through and checking out.

We’ve explored these lots and found some of the most fantastic cars didn’t make it to the main show, such as this insane Corvette Stingray with a purple and gold blown 502, the iconic Eleanor GT500, and the equal parts rare/awesome Saleen Mustang. Because of this, Mr. Barner and I have made a habit of scouring every parking lot for some great finds before going to the actual show.

The lawns of Fort William Henry are given up for the couple thousand cars in the show.  This is where the trophy winners and truly spectacular cars are.  This is the 2014 winner: 1966 Ford Fairlane 500. The production year cutoff for the show is roughly three and half decades. You’ll see everything from hardcore drag cars,

Model 24 Roadster which is one of three left in the world. There are enough cars at this show to keep you occupied all day. Then there’s the fascinating stories about the car’s build or history that the owners often have about their cars.

It’s a sea of retro styling, V8 masterpieces, and enough chrome to blind the international space station. The Adirondack Nationals is one of those shows that will leave you with mild whiplash from trying to commit every amazing car to memory.

One would assume that as night falls, the show would be over.  Au contraire my delightfully mistaken friends. Once night time rolls through (round about 7:30) is when the show truly comes alive. Lake George’s finest close down the main strip to allow the show cars to cruise up and down unimpeded.  The police are actually quite strict about who they allow on the street during this time.

If your car isn’t a muscle car, or is too new, they kick you off the street. Got the kids in the van? Too bad, off the road. Trying to blend in with your Civic Si? Nope, beat it. They will be a tad lenient with newer muscle cars from time to time. I got to cruise a bit with my 2014 Mustang 5.0 which made me smile like a kid who finally got ice cream. The crown jewel in this night time cruise is the allowance of burnouts. By the time the sun has set, both sides of the road are lined with people watching the cruise and (drunkenly) encouraging burnouts.

The scenery is gorgeous and the food is delicious. There are muscle cars aplenty, and the smell of carbureted V8’s is in the air.  It’s nigh impossible to frown at this show.  Every aspect of this show’s atmosphere fosters a gearhead happiness that can only be had at a show of this caliber.  After years of berating, I finally convinced my dad to make the 4 hour trip with me to this past year’s show. Even though he grew up with these cars, he still reacted like I did when I went for the first time. The most difficult task of writing this article was deciding which of my 4000+ pictures to include. I highly recommend taking a day for this show if you can’t make a weekend out of it.  For those who like muscle cars, the Adirondack Nationals show is an enthusiast’s heaven.