With all the information flowing back and forth on the supposed EPA race car rules, I thought I should stand up and give my view. It is easy to jump on the bandwagon and say the EPA overstepped their mandate. The actual rules were enacted many years ago, and have never been enforced on real race cars. This fact that has been almost universally ignored in the enthusiast press. Let’s take a look at the smog rules themselves, and the market they drove. 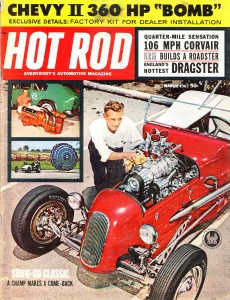 The car companies have spent a lot of money – financed by you, the car-buying public – to build safe, efficient and CLEAN-burning cars. The tough times of the 70s, due to a stumbling response to emission controls, caused cars to become crappy-driving, and have poor reliability. But that period forced the manufacturers to move to computer controls, fuel-injection and catalytic converters. The outcome of that effort meant by 2005, you could buy and drive 400-HP cars that got 30 MPG, and were much safer in a crash.  They were not $4000 anymore, like the 1960s muscle cars, but they offered unheard-of performance.

Back in the 1970s, there were automotive aftermarket reactions to the car company’s performance reductions. The speed equipment industry, which, in it’s infancy, had focused on the “Hot Rodders” and the build-up of drag racing or, sometimes dual purpose cars, shifted their focus to build product lines focused on bringing back the engine performance lost to the nascent intake and exhaust controls on the new cars. There were, and still are a pair of “rulesets” that apply to automobiles sold in America.  One ruleset is the California “Air Resources Board” (ARB) the other set is the Federal EPA.

Both rulesets say that, for any car driven on the public roads, modifications to the factory installed engine controls can only be done if it has been approved in advance with evidence that NO impact on emissions takes place.  In California, that is called an Air Resources Board Executive Orders (EO). Manufacturers could install their product on a particular model, run the tests at a licensed laboratory, and submit the results to the ARB and receive a sticker that they could provide with the product. Usually the cost of compliance jacked up the price a little. The Federal EPA accepts the California ARB certification as evidence of compliance for Federal rules.

California enforces that program with mandatory biennial smog inspections for car models 1976 and newer. If anything not meeting the specs is installed, and an EO sticker is not present, you don’t pass. Cars are also checked at ownership transfer. Car built before that are still subject to some rules, but are not inspected. For those later 70s and 80s cars, it is getting tougher and tougher to meet even the minimal emissions standards which are applied to older cars.

For a while, there was an underground market where car inspections could be purchased via a “friend.” Those are gone, now, pretty much, since the punishment for the mechanics turned into jail time instead of fines. Various states around the country choose to either enforce or ignore the rules depending, it seems, on their view of the Federal EPA in general. Several states also employ the California model.

Since the 1970s and the advent of the smog rules and inspections, the manufacturers have taken a dual-pronged approach to the business. If you leaf through the catalogs of ALL the major manufacturers, you will see some of the hardware labeled “For Off-Road Use Only.” Trailing that will be a standard disclaimer that this hardware may not be installed on a vehicle driven on public roads, etc. etc. The manufacturers feel that this disclaimer turns over any liability for street use (or smog rules violation) to the purchaser.

I can see this point of view. It relies on the capability of the buyer to differentiate between what he wants to do, increase performance, and what he should do, not create more smog. For those of you who, at this point are saying “What does this matter, a set of long-tube headers are the same as a cast iron manifold for smog, aren’t they?” The answer is no, not anymore, even with the catalysts. Yes in the 70’s, no in the 90s and beyond. The computer controlled systems rely on accurate data input to regulate the motor, and that input is fuzzied up by relocation of inputs. If the manufacturers could make them legal, they would. They cannot and have not.

What the EPA is doing is pointing out that most of the non-compliant hardware being sold is NOT going onto real race cars.  It is being (illegally) installed on street cars that are driven to work all week and raced on Saturday night, or doing burn-outs on the expressway. As the cartoon character Pogo said, “We have met the enemy, and he is us.”

My 2005 Corvette could really use a set of long-tube headers, but there are no legal ones meeting either Federal or California ARB rules. (Relocation of the catalysts is forbidden because of slow light-off.) I just went through my smog test a couple of months ago, I passed. But as I look through the cars for sale ads on the Corvette internet forums, I see dozens of total street cars with the long-tubes installed. Maybe they do a few track-days a year. But they put thousands of street miles on in between.

I have been a subscriber to Hot Rod magazine since the early 1960s. For the last 20 years, they have been doing comparison articles, adding different items that don’t meet the regulations, (Inside – 800HP 2003 Corvette!) etc. Almost all of the installs and tuning are done in Southern California, and few trailers are close by. They often add the “off-road only” mantra, then ignore it.   (To be fair, they do also address smog-legal items, at times.)

How do they get away with that? Well, in California I could not. And most people could not. But there is a loophole. New cars are now incredibly clean and the systems now being installed are very reliable and hard to defeat (Maybe VW excepted!).  So the State of California now allows a new car purchaser to waive the biennial inspection for seven years. (The State still gets the fee, via a smog abatement surcharge, but no visit to the smog station is required.) So, if you have a new Corvette or Camaro in California, you can pop-on the long-tube headers, remove the converters for seven years, or say, six years, then sell the car or trade it in.

Where is the sense in that? Many of the other states perform either no smog equipment inspection or just a warmed-up tailpipe sniff with less than original requirements. The fact that people are still allowed to operate cars that have been illegally modified doesn’t mean they are compliant with the EPA requirements, it just means the states have agreed to look the other way.

As a fervent observer of the hot-rod marketplace, I noticed that the manufacturers are also looking the other way on these issues. The current EPA hubbub is being driven by SEMA, which was once the “Speed Equipment Manufacturers Association” but is now the “Specialty Equipment Marketing Association.” The change in the focus of SEMA is not subtle. It is a trade association for companies who sell stuff to bolt onto your “street car.” Yes, many of the companies also sell race car equipment, but it is a small and shrinking portion of their automotive aftermarket. There is a complete race-car market, not really addressed by SEMA. (Note, my company is a member of SEMA and I sell both race car and street car equipment. But nothing for 1976 or newer cars!)

SEMA has chosen to “up the ante” on this fight. The EPA may cave to the “race car” exemption, recognizing that their mandate was likely not intended to cover “real race cars,” or the federal government may pass legislation to tell the EPA that they have no jurisdiction on the race cars. I fear that the fallout from this may be the restriction in availability of equipment for only partially raced cars. How can the manufacturers justify building thousands of parts that they know are going on street cars, in violation of federal laws?

Nobody can argue that the restrictions on modifications should not be applied to street cars. That is what the legislation was always intended to cover. If you have a street car which you race once in a while, you should build it for street use, and stay compliant or build it for racing and keep it off the street. Or buy and race an older car which is not subject to smog-inspection laws.

Seth Emerson is a hardcore Car Guy who began racing more than 40 years ago and who today operates Silicone Wire Systems in San Jose, California, a supplier of custom ignition wires and related products for vintage cars, with a specialty in the Chevrolet Corvair.