Strong and Fast – NASCAR is Founded

This Month in Motorhead History

In today’s day and age, it is both illegal and generally bad form to include references to cars in alcohol ads and vice versa. Drunk driving was outlawed in the United States in 1910, starting with New York state and quickly becoming one of the cardinal sins of driving, and for very good reason. But despite these changes, and the need for an obvious distance between cars and cups, one of the most important, influential and long-standing elements of the car industry is deeply indebted to the prohibition era and the rum runners who provided America’s degenerates with drink for so long.

Yes, the prohibition ended in 1933, after 13 years of speakeasies, moonshiners and general bad behavior, which the outlawing of alcohol did little to prevent, but those early days of underground booze cruisin’ were to become some of the most important in all of automotive history. 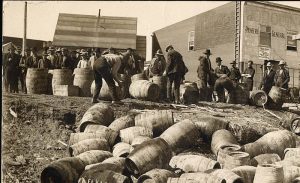 After the prohibition was repealed, rum runners took their skills and started hiding from the tax collectors rather than the police. The cars once outfitted for carrying contraband whiskey from Canada and champagne from France were made better, faster and stronger as the years passed.

And, in truth enthusiast form, it didn’t take the owners of these custom beasts long to go head to head in the search for glory of another kind entirely. The Bonneville Salt Flats and Daytona Beach had become the places to be for racers interested in seeing how much faster they were than the other guy and not much else. For years, the races took place in much the same way that the original cars and their purposes did, unground, unscrupulous, filled with dirty dealing and backroom bad behavior.

Until William “Bill” France came onto the Daytona scene in 1935. He was a Washington D.C. transplant, suffering the effects of the Great Depression, and it didn’t take him long to recognize the gaping holes in the prohibition-style racing world. Over the next several years, France began to develop ideas for a racing organization that would protect the racers and promoters and would help to make the unscrupulous world of racing into something to be admired. On December 14, 1947, France sat down with other masters of the industry and shared his ideas. 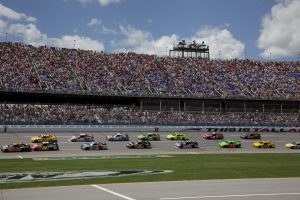 NASCAR would go through many iterations, just like the cars and racers that made it so famous. Rules and regulations, safety-requirements, rookies, and old-timers, would all become a part of the NASCAR name, bright colors, wild fans, an American passion that France could never have predicted, all those long years ago.

And in a way, it makes sense. NASCAR, auto racing, it is a mad, wild sort of thing. Even now, with the safety advances and requirements, no one would dare to call the sport safe. But the truth of the matter is, NASCAR has never been safe, not in any form, not when racers pushed the limits of their cars at Bonneville and other unsanctioned tracks, not when rumrunners pushed the limits of the law when they snuck in whiskey and gin and champagne. NASCAR has a history mired in pushing the envelope, going just a little too fast and a little too hard – and as the association celebrates its upcoming birthday, that doesn’t appear to be changing anytime soon.

I’ll toast to that!