An estimated 110 people learned about Tazio Nuvolari and got a close look at four of the pre-World War II cars he drove or replicas thereof at the Simone Foundation Automotive Museum in Philadelphia on Monday, September 28, 2019.

As museum founder Dr. Frederick A. Simone and curator Kevin Kelly described the cars and ran them on the museum’s back lot, they retold the exploits of Nuvolari (1892-1953). 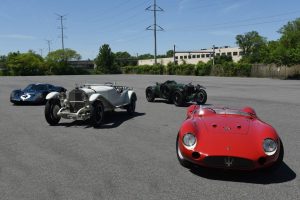 The above count includes the October 12, 1936, revival of the Vanderbilt Cup Races on Roosevelt (NY) Raceway’s road course for GP and AAA Indy cars. The so-called inventor of the four-wheel-drift won the inaugural edition in the Scuderia Ferrari Alfa Romeo 12C-36 but dropped out of the following year’s run on July 5, due to a broken connecting rod.

The tally does not include Nuvolari winning a “night before” New York short track oval speedway feature against Californian Bob Swanson.  Nuvolari’s attempt to qualify for the 1938 Indianapolis 500 ended with his Miller-Offy gearbox breaking in practice after his original supercharged Alfa Romeo was withdrawn.

“Tazio Nuvolari is becoming a forgotten legend,” said retired surgeon Simone. “He can become forgotten in another generation.”

Both Simone and Kelly have been turning their twice-monthly Demo Days, held since their 2008 grand opening, from spotlighting car marques to personalities.

Those who stayed after the demonstration’s 2:00 PM end saw Kelly drive the cars back to their museum display places. The quartet are among over 60 racing and showroom-quality cars ranging from a 1907 Renault Vanderbilt roadster to a 2002 NASCAR “Dyno Mule.”

“I hope that there will be a few more people,” said Kelly before closing the Eastwick neighborhood museum for the night, “who now know about Tazio Nuvolari.”