Nashville, TN– Earlier this year, the city of Nashville rejected a transit plan that would have added five light-rail lines, an unground tunnel, four bus rapid transit lines, and four crosstown buses to the greater metropolitan area, to the tune of anywhere between $5.4 billion to more than $9 billion. On paper, it’s not necessarily challenging to see why the vote came down to a 2:1 margin against, thought a great many factors, including socioeconomic and industry-driven (the automotive industry is the second largest in Tennessee, following healthcare) contributed to the downvote.

Nashville is not the first small city to turn down such transit initiatives, meaning it will not be the only small city to regret such a decision in the next decade, when booming development and the related ubiquity of traffic and ride-sharing apps create an impossible to untangle web of downtown congestion without reprieve.

The current population of Nashville proper is just over 660,000, with the Nashville Metropolitan Area coming in at just about 1.75 million people. It is expected to reach two million people by the 2020 census, which would make it one of the top ten largest metropolitan areas in the country. Just over 50% of the city’s population is made up of renters, and nearly 37% of Nashville’s residents are married, increasing the likelihood of two-car households.

So, what does a city with a population density of more than 1,200 people per square mile back as of 2009, when the city’s annual growth rate was about 1.04% a year, do about congestion?

They certainly don’t turn down a major transportation initiative.

t is not quite fair to blame the unprecedented rise of ride-sharing apps and ease of private transportation entirely, but they are certainly a fundamental influence on the decision to skip public transit options. And they are growing–mostly to the benefit of the white-collar developers, with Lyft and Uber drivers still struggling to collect enough rides or fares to make up for expensive leases. We have seen that even in cities with extremely extensive public transit systems, these ride-sharing apps are causing unmitigated congestion, disruptions with traditional taxi services and other city-driving complications.

In New York City, which may not have one of the most effective public transit systems in the country, but certainly has one of the largest, caps were recently placed on how many vehicles could access licenses for ride-hailing, limiting the number of Uber and Lyft drivers capable of working at any given time, and undoubtedly setting a precedent for cities to follow. There is little doubt these services are a fundamental form of transit, but for economic, environmental and standard of living reasons, among many, many others, they cannot be our only options. According to the Uber website, there are more than 75 million riders and 3 million drivers in over 65 countries, taking more than 15 million rides a day. When you consider, too, that many ride-sharing programs are invested in autonomous driving technology that would eliminate the need for human drivers–one of the biggest expenses these companies face–it seems unlikely that the number of rides, riders or vehicles on the road is likely to diminish anytime soon.

Cars and private transportation are a fundamental part of life, even in cities like Nashville, Atlanta and more spaced out urban environments you’ll find further inland than New York City. Uber and Lyft provide options for responsible partying, limiting expenses by not owning cars and more. They are important, but they are not the be all and end all–and they are not, at the end of the day, car companies. They are technology companies designed to fix a need in the market, without necessarily understanding the environments in which they operate. 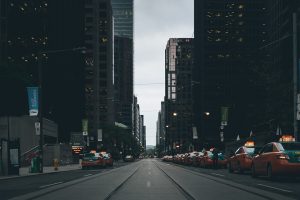 East coast transplants to urban sprawl cities will be astounded by a lack of transit options, but for many, the ubiquity of highways within city limits is perfectly the norm. That said, these not-so-much smaller cities are experiencing major booms and a reliance on private transit is going to prove problematic in years to come. Every car enthusiast knows that driving can be an awful experience when stuck in rush hour congestion, and many residents do want less-expensive, less hectic travel options that don’t require parking downtown and worrying about designated drivers.

Cars and public transportation are symbiotic. The better one system is, the more efficiently the other will run. While systems in older cities like New York and Boston are far more entrenched, cities like Nashville and Atlanta still have the chance to make major strides in joining private and public transportation to help manage the rapid expansion. Let’s just hope these cities realize it before it’s too late.