This weekend I had the opportunity to attend two car shows. Both shows were hosted by true automobile enthusiasts. Both shows had amazing and wonderfully unique cars to look at and enjoy. Both shows had food, music and vendors selling interesting one-of-a-kind items. Both shows represented a subculture with its own customs, clothing, and approach to life. But these two car shows could not have been more different from each other if they had been held on different planets. 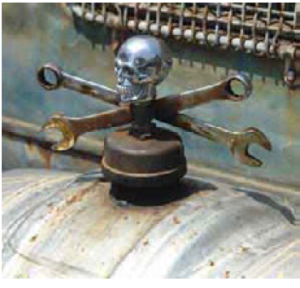 On Saturday, I got my 62 TBird ready for the Road Devils 4th Annual Peel Out, held in a parking lot in South Orange, New Jersey. This is a hot rod show, more accurately, rat rod show straight out of Car Kulture DeLuxe Magazine. There are no trailer queens here, just the backyard-welded, handmade, knuckle-busted, blood and guts hot rods and customs whose only set of rules is to keep it real. These rods are raw, loud, beasts with imagination, humor and the ingenuity to make a vehicle out of junked parts. They don’t take themselves too seriously, with flat rattle-can black or rust being the finish of choice, and skulls, pin-up girls and spiderwebs the standard motif. I donned the appropriate apparel: black muscle-tee, jeans, and black shoes and drove up in my black car with left arm hanging out the door to show off my newly-minted pin-up tattoo, and my entry was assured. I handed the guy at the gate $10. and he looked over the Bird, nodded and said: ”cool.” My car was one of three cars at this show that actually had shiny paint (but it was accepted anyway).

The vendors offered an amazing array of Kustom Kulture artifacts from magazines to shortbrimmed hats, tiki heads, and posters. The girls, all of whom looked as stunning as bowling- calendar pinups in spiked heels and tattoos were selling hand-made kitch and jewelry. Hot dogs and Cokes are the cuisine of choice but if you play your cards right you might be able to get a “PBR” (Pabst Blue Ribbon), this show’s un-official sponsor. I do believe I purchased the ultimate in Kustom Kulture kitch: A red metalflake-painted toilet seat cover with a 40’s pin-up girl provocatively posed in the center. (Don’t worry the pinup is old, but the seat is new) Upon seeing this work of art, there’s only one thing to say: “cool”. 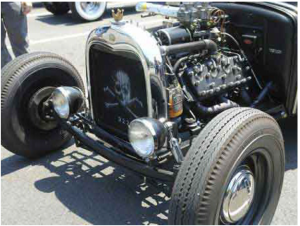 A live Rockabilly band was starting to play and they seemed pretty good, but the oppressive heat was beginning to take it’s toll. At nearly 99 degrees and
bright unrelenting sun, the blacktop parking lot was like a giant frying pan cooking all the black clothing, black cars and black ink tattoos to the point where I thought the cars might just start spontaneously exploding! Despite the trappings of Kar Kulture: the black muscle tees, the 50’s hairdos, the tattoos, you have to admire the fact that these cars are the real deal. These are not expensive retro fiberglass kit bodies attached to modern drivetrains by expensive restoration shops and trailered to the show….

These rods are torched from steel junkyard parts and welded together with minimum cash outlay. There’s nothing comfortable about them. They are raw, nasty and edgy but they are the real thing, just the way rods were built in the 40’s and 50’s. The same materials, the same sweat, same blood, and same convictions. If the parking lot full of hot black rods, on hot black asphalt, in 99 degree heat were to suddenly and spontaneously explode, creating one big fireball sending torched metal, rubber and tiki heads into the sky, I think the guys who build ‘em would probably feel it was the perfect ending, the ultimate and fitting finale, the real deal, with only one thing left to say: “cool”.

Exactly 24 hours later… I attended another car show,
which could be considered the complete opposite, 180 degrees apart, from the Road Devils 4th Annual Peel Out. I got on the Garden State Parkway and headed north, then east into Connecticut for the Greenwich Concours. Needless to say we would not be entering
the T-Bird in the event. Not only would the Bird not qualify for this illustrious event, but being that this is Sunday, of the two-day event, the Concours will only be having European automobiles on display. The first thing you notice is the amazing amount of Ferraris,Lamborghinis and Bentleys parked right on the street on the way to the event grounds. 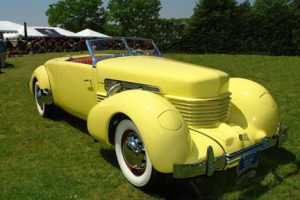 The parking lot was an event unto itself with many amazing vintage and modern classics to see and we’re not even at the event yet! The first big difference between the Road Devils show and the Greenwich Concours will hit you right in the wallet. Whereas the Road Devils show was free to stroll though, the Concours had a $25 spectator admission fee (yes folks, twentyfive dollars perperson) After that initial kick in the wallet, the first thing you realize is that this even is held on “grounds” not a parking lot and that there are beautiful views of the water all around. Unfortunately, the grass and bay views did little to lessen the, yet again, 99 degree unrelenting heat. And then you see them… cordoned off in large circles (that you are not going to cross) are groups of the most amazingly beautiful and incredibly rare European cars you will ever see: Ferrari, Lamborghini, Maserati, Porsche, Mercedes Benz, BMW, Alfa Romeo and a couple of makes that you never even heard of, that are so unique and beautiful that you might just plotz! (but please refrain from “plotzing” on the “event grounds”)

You realize you are seeing some of the very finest and rarest European cars in the world. These cars are thoroughbreds, handcrafted by artisans with no regard for budgetary constraints. The judges walk around with clipboards wearing jackets and ties and white straw fedoras. In fact, the dress code appeared to be white shorts, Polo shirts and white straw fedoras as just about everyone (except me) was wearing. The “grounds” were set up with giant white tents for individual exhibits and the vendors sold one-of-a-kind racing artifacts that look like they came from a Monoco Racing Museum. 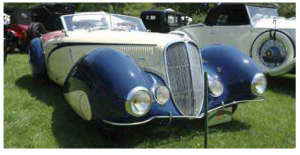 Food consisted of elegantly prepared endive and black forest ham sandwiches and sold at unholy prices along with Perrier water and champagne.

I stumbled my way in (read: crashed) the auction tent which was open only to serious bidders with an extra $20. burning a hole in their white shorts. Inside was a wonderland of classic cars you could actually walk around and touch if you dared. If you accidently scratched your ear you might have bid on a rare Austin Healy roadster worth more than your house and yearly salary put together. We worked our way around the whole show, looking at all that beautiful sheetmetal and horsepower, and the passion that the automotive enthusiasts put into these cars and it began to dawn on me. Maybe these two show were not so different after all. In both cases, the folks who built these cars are extremely passionate about them right down to the slightest detail. Both groups had their own dress codes, their own food and their own style, but at the end of the day whether it was painted in Ferrari Red, or rattle-can black, it still came down to one thing… it was all about the cars.