New York in a Nutshell

Anyone who has attended an international auto show knows first hand what it’s like to suddenly find yourself in a chorus number for Cirque du Soleil. Everywhere you look there’s flashes of chrome, both fake and real, the sound of engines and – on press days – foreign company presidents extolling the virtues of their silver mid-sized sedan vs. the one on the other side of the plush carpet. International auto shows are an animal all their own, when it comes to the car show zoo. 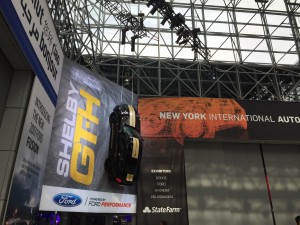 That being said, I found myself quite pleased with this year’s New York International Auto Show. I’ve been going to this show for years – initially as a spectator, then a lurker, and recently as an official automotive journalist with my own website. In the last near decade, I have watched the automotive industry’s slow descent and hopeful rise, as gas prices, environmental concerns, technological advances and styling changes represented the entire automotive world in a few packed floors of the Jacob Javits Center.

Did this year’s show have a specific theme – I was asking myself that, as I wondered exactly what to write this article about. A few years back, the Porsche 918 Spyder foretold a future of green super cars. Before that, the death row of Hummer, Pontiac, and SAAB offered up a bleak future for some of the biggest brands. I have to say – despite the obsession everyone has autonomous technology, and the increasingly common green tech talk that is becoming less newsworthy by the day, there was nothing concrete that could solidify the companies to a theme this year, except for this: hope for the future.

Alright, Ruby. Calm down with your Bravehearting dramatics about saving our industry. Hope. Isn’t that sweet?

I stand by it. In a tumultuous decade that has see the creation of historical companies (read: Tesla) and the death and destruction of favored Marques (Saab, Mercury, Saturn, Pontiac, just to name a few), the sensation that the car industry has more than just leveled, has more than just found stable footing, and is actually improving – and with a great big smile upon its face, is something to be talked about, at least more than the latest green tech mid-sized sedan.

Don’t believe me that the car industry is having fun? Take a look at some of the design, technical, and performance advances displayed at this year’s show.

Mazda MX – 5RF: Oh glory to the retractable fastback. The style is modern, but with a retro feel, and the audience is there for it. I’m not worried for Mazda. In addition to their sleek new style, the new Mazda anticipates 155 horses. Huge – nah, but just the perfect car to throw around the coastal roads on a summer afternoon. It’s cute, zippy, and fun. A little classical cool mixed with all modern tech, that is such an obvious recipe for success that you have to wonder why they haven’t done it yet.

Fiat 124 Spider: While on the subject of nostalgic Mazdas – check out the new Fiat 124 Spider and give us the first answer that comes to mind: Fiat or Miata?

Well, you don’t actually have to pick. This modern roadster may have all the styling cues of the Italian masters of yesteryear, but it’s improved in one big way – Fiat didn’t make it. In a collaborative effort between the two companies, the car is largely built upon a MX-5 Miata.

Of course, Fiat and Mazda are going for different things, as one can tell from the styling and demographic of each company. But there’s something to be said about an Italian roadster you can rely upon, especially when it comes with 160 horsepower, which is nearly double the output of the Fiat 124 Spider fifty years ago. The best part – you can actually buy this one, coming to a Fiat Studio near you this summer!

Lincoln Navigator: If you’re looking for the perfect vehicle to bring your Mazda and Fiat home in, check out the new Lincoln Navigator. Okay, I exaggerate, but check it out anyway. In a fit of “eh, it’s not like we’re going to produce it, why don’t we have some fun,” Lincoln came out with one cool concept car.

A huge gull wing door debuts on this large SUV – (and thank goodness it’s only a prototype, given that the door takes about four feet of space to open). To add to the drama of the entrance, a small set of steps descend from the floor boards as the door rises above you. It’s all quite exciting. (As dad put it, what, no elevator?) While Lincoln is all about luxury, the new Navigator concept puts out an impressive 400 (conceptual) horses, and comes equipped with the latest in technology and safety innovation.

Want it? Don’t hold your breath. With no plans of production in the works, it seems like Lincoln might just let this one go the way of all wonderfully absurd concept cars. But man, it’s fun to dream.

Buick Avista: Styling was definitely on point this year. While I know I’m not alone in feeling like Buick is just trying way too hard with their commercials, (really – you can’t tell that’s a Buick? Cause I’m thinking you wouldn’t be able to tell a Lincoln Navigator from a ham sandwich), there is more than just something to be said for the new Buick Avista. It’s sleek, elegant, and almost as if Buick might have actually figured out how to design a car that fits their absurd commercials. Perhaps it’s sacrilegious, but if you squint, the front end could almost pass for a Jaguar. You decide.

Volvo Safety: For all that we’re seeing an era of styling that DaVinci himself would be proud (if not slightly confused) of, it wasn’t the only important change emphasized at this year’s show. Swing on over to the snowy mountains of Sweden and you’ll find yourself staring down a full sized moose statue at the Volvo booth. We met a man with the third most stressful job in the world, (Potus, Les Mans race car driver, and this – Man in Charge of Safety at Volvo. Talk about pressure!)

The moose wasn’t just there for decoration (though why the hell not, it could only improve a room!) but rather, because Volvo’s latest innovation in safety has focused upon the threat of top heavy animals in collisions, and what it means for the squishy part of your car, where the windshield meets the roof. Changes in design and structure have enhanced passenger safety in the event of hitting an animal with a big old body on top of little legs, and that’s awesome. Volvo may no longer has the market cornered on safety, but one thing’s for sure – they’re still the top dogs. Or mooses.

And speaking of eight hundred pound animals in the room…

Part One: For the love of God, I have already written several pieces about this nonsense, (insert your own verbiage) of Volkswagen pulling out their old busses and marketing them as the greatest thing since the invention of the pot brownie. Check out my article from a few years back about the Bulli, and then take a look at the Budd-e. Oh, you think the Tron inspired blue and white light strips, and fancy doors are going to make me forget that there is still no bus, and at this point, there’s not going to be, no matter how many times you dust off the plans and add in another micro-USB port.

When working on my article several years ago, an expert on concept cars made an important point. The generation that wants the Volkswagen Bus because it’s nostalgic to them, isn’t going to want it for much longer. Their kids are grown up, they don’t need to haul a dozen people around, and the square, anti-aerodynamic shape is getting to be too large a car to drive, let alone get into comfortably.

Now, that doesn’t mean it won’t sell. But it won’t sell nearly as well as the Bug, which capitalized on the nostalgia feature to no end. Soon, they only nostalgia they’ll be able to bank on, is recalling the first time they tried to sell us the new bus. At least, if they ever get around to producing it, they’ll have one buyer – if they don’t keep trying to pull the wool over my eyes.

Part Two: The bus is a desperate ploy. Dad and I couldn’t help but joke about it – when does VW host their press conference, 3:30 in the morning? Now that the dust has begun to settle, and the allegations about Volkswagen deceiving just about everyone, lying, cheating, and stealing to get what they want, have been proven entirely true, there’s not like a whole lot to talk about. In a room full of journalists who know the score, what exactly do you say?

I say, I’m disappointed. And also that it’s going to take more than one shiny bus and some radio silence to get this scene to blow over. Volkswagen made a choice, and set themselves up for many years of a distrusting consumer base and unhappy media – I hate to ask, but how dumb do they think we are? The reality of the lie was realest while walking around their booth, and knowing that they’ve dug their own grave on this one. Sure, Volkswagen is safe from the chopping block. But as the great automotive enthusiast and Le Mans finalist, Jane Austen, once wrote, “My good opinion, once lost, is lost forever.” Let’s just hope there are some more forgiving Vee Dub enthusiasts out there. Or that this is the catalyst for them to finally make that God forsaken (incoherent mumbling) bus of theirs.

I hate to end on a bad note, so I won’t. Volkswagen may have dishonored the name of car, but I was otherwise impressed by the scope of technical, styling, and safety creativity that was on display at this year’s show. Automakers are wholeheartedly embracing new technology and modern communication, (it’s social media, not the devil himself, alright,) and that’s awesome. With the reliable stunners – Nissan GTR, Ford GT, and Dodge Viper, as well as so many others, this show was a feast for the eyes and the speed freaks. I may have been raised a classic car gal, with a penchant for chrome and a love for the early age, but make no mistake – it’s a great time to be a car enthusiast.

All other images by Ruby Scalera