This Week in Motorhead History: Nash—From Bicycles to Jeeps 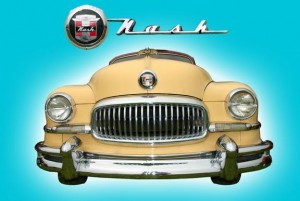 It was over 100 years ago this month that automotive pioneer Charles W. Nash, at the time a former president of General Motors, acquired the Thomas B. Jeffery Company of Kenosha, Wisconsin, and renamed it the Nash Motors Company.  Nash automobiles would then live on as a brand through 1957, when the Nash name was retired in favor of Rambler.

But the Rambler name was not new. The Jeffery Company began manufacturing a car known as the Rambler in 1902, the name being applied to the automobile following its use on bicycles, which were quickly growing in popularity at the time.  Nash Motors Company continued the use the Rambler name, and after Nash and Hudson merged in 1954 to form the American Motors Corporation, AMC kept the Rambler nameplate alive through 1969, helping to make it an American classic.

The names “Nash” and “Rambler” were inexorably entwined in the minds of the public, as perhaps best demonstrated by the 1958 hit record, “Beep-Beep.”

AMC bought Kaiser-Jeep in 1970, and AMC itself was later acquired by Chrysler, at which point we can place the end of what had been Nash Motors Company.  Nash automobiles were in their day innovative and distinctive, pioneering features seen on the cars of today.  But the “big three,” GM, Ford, and Chrysler, made life increasingly difficult for independent manufacturers, which led to the Nash-Hudson merger and later to the Chrysler acquisition. We are only now seeing indepdent automakers finding success on the mainstream market, though the backing of enormous private wealth still seems to keep to survival.

Jeep, of course, thrives today as a component of Fiat Chrysler Automobiles, and so it is easy to draw a line from the Jeffery bicycles of the late 1800s through Nash Motors Company to the Jeeps of today’s ever-evolving automotive world.