Honey, I Shrunk the Race Track

In 1903, the first automobile race was run on the one-mile dirt oval at the New York State Fairgrounds in Syracuse, New York, and in 2015 the last such race was run.  The track, built originally in 1826 for horse racing, was razed following the 2015 event and the site was redeveloped as part of the larger fairgrounds.  That, most racing fans figured, was that.

There was a time in the United States when most national championship races were contested on one-mile fairgrounds tracks, tracks which existed in nearly every state, tracks on which drivers such as Mario Andretti, A.J. Foyt, Johnny Rutherford, and Al Unser all competed.  Today, only a handful remain, and only three of them – the DuQuoin State Fairgrounds in Illinois, the Indiana State Fairgrounds in Indianapolis, and the Illinois State Fairgrounds in Springfield – still host motor racing.

After 2015 no one expected racing to return to the fairgrounds in Syracuse, but on a recent late winter weekend, we were there for the first event to be conducted on a temporary indoor track erected inside the Exposition Center, a 136,000-square foot building built on part of the land formerly occupied by the mile. 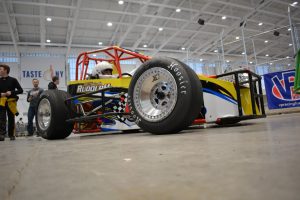 True, it was no national championship event, and it wasn’t Super Dirt Week, the hugely popular season-ending race that, after more than 40 years, was evicted from the fairgrounds after 2015 and forced to move to the half-mile Oswego Speedway.  But it was racing, it was at the New York State Fairgrounds, and by all appearances, it was a success.

The track was a one-tenth-mile oval laid out on the concrete floor of the building, and the cars were TQ Midgets, the same single-seaters that race as part of a winter indoor series in Atlantic City, New Jersey, and Allentown, Pennsylvania.  “I never thought I’d ever be calling a race at the fairgrounds again,” public address announcer Shane Andrews told us, but there he was, along with his colleague Paul Szmal, each happily behind a fairgrounds microphone.

Also, there were more than 100 racing teams, split among the TQ Midgets and two support classes, along with event sponsors VP Racing Fuels and RPM Raceway, 2019 “Ms. Motorsports” Taylor Fullin, and several thousand fans.  The National Anthem was sung to perfection by Mimi Lazzaro, daughter of the late and highly-respected New York State racer Lou Lazzaro.

The new Exposition Center, opened for the first time late last summer, is a bright and comfortable facility.  Only some teething problems with the new building, which was constructed under a tight deadline (and likely with lowest bidders, some nepotism, and perhaps a greased palm here and there) threatened to disrupt the proceedings.  The p.a. system was inconsistent and the ventilation system was noisy, but even a delay a Friday night due to the lights going out did not diminish the enthusiasm of the spectators.  They waved their cellphone flashlights during the delay and cheered mightily for their hometown favorites.

The hometown boys did not disappoint, with New Yorkers Justin Bonsignore and Erick Rudolph claiming victory on Friday and Saturday, respectively, over a field that encompassed drivers from multiple states.  Rudolph, who swapped the lead with Bonsignore several times on Friday but who remained out front decisively on Saturday, earned the overall series championship.

Indoor racing is very much a contact sport, with sparks flying and tempers flaring.  On Friday, following an on-track incident, two teams got involved in a shouting contest which devolved to the point that both were, ahem, asked to leave.  On Saturday, Matt Janisch, winner of the first event in the winter series in Allentown, provided some unintentional fireworks by suffering an end-over flip on the frontstretch in the main event, then made a brief visit to the pits for repairs and stormed from the back to a ninth-place finish.

When the historic mile track was eliminated, under a revitalization plan supported by New York State Governor Andrew Cuomo, countless racing fans swore off the fairgrounds and to this day have only nasty things to say about the guv.  But we have to concede, the modernization of the fairgrounds makes sense in light of land-use considerations and contemporary entertainment preferences.  That racing has been able to return to the fairgrounds, even in this distinctively different form, is okay by us.

Photo for CarShowSafari.com by J.J. Lane