Are Car Guys Switching to Bicycles?
by Bob Marlow

On April 15, instead of mailing a check to the IRS we visited the Spring Swap Meet at Raceway Park in Englishtown, New Jersey, for the first time in many years.  This year’s event was the 34th annual edition (a similar event is held each September) and to judge by things at Englishtown, eBay and the internet have not killed off swap meets. 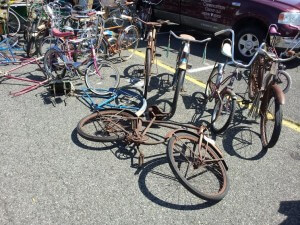 3,000 vendor spaces were sold out, the first complete sellout in recent years, and beautiful sunny skies brought out the lookers and buyers.  Because it is set at a drag racing facility, the Raceway Park swap meet skews more toward big blocks and horsepower than it does to antiques and classics, although there are plenty of items offered to appeal to the owner of a Tudor Ford or a tuner Civic.

But what struck us this time was the sheer number of bicycles!  Countless vendors had one or two Schwinns or Rollfasts, several had lineups of two-wheelers, and at least two sellers brought trailer-loads of vintage bicycles.  What’s going on?  Do these vendors know something about the future of the hobby that we do not?  Are the currently-rising gasoline prices about to skyrocket, forcing us all to dust off the ol’ Raleigh?

If an endless selection of bicycles is not concerning enough, at Raceway Park visitors are welcome to ride around on their own, and many do.  This creates aisleways that resemble some third-world streets more than a US venue.  We like bicycling as much as the next person – we use them extensively in our town and we take them with us on vacation trips – but we don’t know of any show car owner who is happy to see spectators on bicycles.  Perhaps there will be some restrictions on the second and third days of the event, when show cars line the drag strip itself.

I went to the Englishtown Car Show and Swap on Sunday, Primarily focusing on the car show lining the quarter-mile track. While I was not aware of much bicycle traffic, I did enjoy seeing some nice cars.  While I can’t say how it was Saturday, Sunday’s car show was pretty good, but not too much beyond the standard cruise-night variety.

There were a few really unique cars, a gorgeous ’57 Studebaker Golden Hawk, an unrestored ’58 Oldsmobile Eighty Eight wagon decked out in full surfing attire and a shortened ’64 Galaxie beautifully done, but falling under the category of “why?”  And a really sharp 1971 Maverick Grabber… of all things!
cMaybe this year I was hoping for something really unique and dramatic at Englishtown, like last year’s vintage race cars, etc.  I mean it is a car show on the quarter mile, how about getting some cool vintage hot rods that actually ran the quarter mile that you are standing on? Maybe pull a ’70’s dragster out of moth balls, or a few entrants from “Vintage Hot Rod Night-O-Thrills”…. For those of us who really don’t need anything from the swap meet, and aren’t shopping for a bicycle, how about some really great, truly historic cars on this truly historic location!

I will say one of the thing I love about walking the car show on the Raceway Park quarter mile is the track surface itself. Made to be especially sticky, I am constantly amused by the “sticky” sound that your and everyone else’s, sneakers make as you walk the show. I’m wondering if you get a really hot day, the crowd will literally get stopped in their tracks. If so I hope I get stuck in front of some really unique vintage racer I can drool over before being rescued…