Anarchy of the Early Auto

This was going to be a factual article. I had it all planned out – the history of early auto racing, where the first race was run, who competed, how fast the cars ran, if anyone was able to complete the race. It was going to be factual.

But the thing is, the history of the automobile doesn’t fit nicely and neatly into a box. It is a short history, arguably less than 150 years old, and runs horizontally across automakers, countries, inventors, and, yes, races. To make a list of “the first five auto races” you would have to answer questions like: Are the cars gasoline-powered? Did anyone complete the race? Did more than one person compete? Was it legal for them to race? And other odd, nearly incomparable queries that scratch the surface of just how complicated the early age of autos really was.

In many ways, cars bear a striking resemblance to the rise of technology. After all, the early cars were so incredibly new that they didn’t yet have a name – horseless carriage ring any bells? And the idea of the Internet and the smartphone was more akin to a 1960s science fiction story than reality until mere years ago. Humans have been creating the new, wild, and unexpected forever, but I do believe the difference is that now we are accustomed to it, whereas back then, no one knew what to think.

And for that reason, and many more, I’ve come to a deep and abiding love and respect for early autos, not dissimilar from the love and respect you might feel for a child attempting to learn to walk. It is chaotic and insane and goes against every natural instinct, but miracle upon miracle, they might actually succeed.

Because in addition to sharing some years with the age of the Wild West, the early automotive industry was a Wild West itself. Take for instance the Duryea Motor Wagon story I shared recently, where the original race date had to be pushed back because not a single car was completed in time to qualify. After that, only 6 of the original 93 cars registered made it to the starting line and only 2 to the finish line. 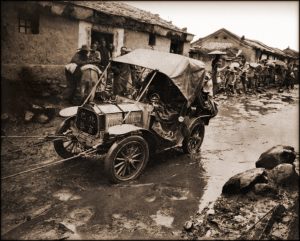 For a moment, let’s forget the era of ‘53 Corvettes and ‘64 ½ Mustangs and even Ford Model Ts. Go earlier. Think bigger. Tune your mind to the era where the auto industry wasn’t an industry at all but thousands of inventors hacking away at ideas in their garages and barns. Think of an era where electric cars might have succeeded, only there wasn’t enough electricity between the cities to go very far. Remember that the first cross-country auto race included nearly as much time digging wheels out of the mud as it did driving, as roads in their long-distance and truest sense, would not come about until nearly two decades into the 20th century.

Those early years of cars were made up of calamity and near catastrophe, of police officers pulling over new-fangled contraptions they had never seen before, of laws made after they had been broken, of car crashes and drunk drivers because hell, they honestly didn’t know better.

As of late, I’ve become quite a sucker for the anarchy of the early auto. Could you imagine having a car world today with two thousand individual automakers? Think about the concept of using your license plate as your driver’s license and taking it off if you were going to drive another car. Think, terrifyingly, of the idea that you didn’t need to pass any sort of exam to drive on the open roads. (This is actually scarier than you think, as many states didn’t require you to pass a driver’s exam until the 1950s, ending with South Dakota in 1959…)

And the truth is, the car industry hasn’t stopped being a little wild and a little insane. No, it’s not quite the nihilistic age of runaway horseless carriages on muddy streets with no blinkers, windshield wipers, or seatbelts. But cars have gone through eras and waves that no one could have ever predicted before, just as no one could have ever predicted their birth. Hot rods? Madness. Muscle cars. Call an exorcist. Green technology? A phasing out of manual transmissions? Government-issued safety standards?

Am I a fan of the self-driving auto? Not particularly. But I wouldn’t call myself a car enthusiast if I didn’t recognize that autonomous cars are not a deviation from classics of yesteryear, but an homage, kin, the great, great-grandchild of horseless carriages, mixed in along the lines with sports cars and supercars and muscle cars and family cars and sedans and all the rest. In order to survive, classic cars have to be just a little bit wild, a little bit weird, and a little bit off the beaten track.

After all, when cars were first invented, there weren’t any tracks at all.