This week, in 1933, R. Buckminster Fuller, made a name for himself in the automotive world when he applied for a patent for his Dymaxion car. To call the Dymaxion a car would be generous. Though the automotive industry was still in its youth, the Dymaxion was a vehicle unlike anything even the most imaginative automotive minds had ever seen, and though it would see little commercial or critical success, the Dymaxion Car is undoubtedly a symbol that genius and madness both required a boundless imagination.

Like its name, a combination of the words ‘dynamic’, ‘maximum’, and ‘tension’, the vehicle was a combination of design ideas taken from the natural and technological spheres. It shared resemblance with both submarine-style ships and large aquatic mammals, complete with a fin at the back and several rows of windows. There is little doubt of the influence of naval architect, Starling Burgess, in the design and development of the vehicle. 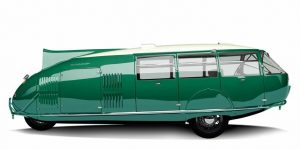 R. Buckminster Fuller was a man with ideas. He was an architect, author, and designer, just to name a few, and would later be known for his work on the Dymaxion House, an energy-efficient prefab home designed to utilize the factories and workers already in play from World War Two. The Dymaxion car was just as inventive, designed to play the role of a vehicle capable of tackling earth, sky, and sea in a single fell swoop.

Unfortunately, due to timing, lax safety efforts, and managerial problems at the top, both the Dymaxion Car and the Dymaxion House were to go down in history as oddities, rather than the ingenious and progressive designs they truly were. At the Chicago World’s Fair in the mid-1930s, the Dymaxion garnered a great deal of attention and interest. Unfortunately, it was also involved in a fatal crash, and not the last.

Buckminster Fuller was not to be deterred, and many others in politics, invention, and the automotive sphere saw his invention for what it was, a way of pushing design and engineering into the modern-day. And yet, it became increasingly clear that the elements designed to make the Dymaxion a vehicle to conquer the seas and skies also prevented it from conquering the streets. It continued to be involved in crashes and through the intrigue of the style and aggressive innovation, came one common theme, according to Fuller himself: “[The Dymaxion car] was an invention that could not be made available to the general public without considerable improvements”. 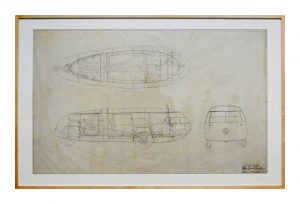 Was the Dymaxion car not ready for the world or was the world not ready for it? A little of both, perhaps. The vehicle would certainly never fly, and to look at the sheer number of windows and doors, it would likely sink the instant it touched the water. It was not safe on the road or the track, and so much as a strong wind could take the vehicle from unsteady to dangerous in a second’s time.

But the Dymaxion also served as a statement, on design, innovation, and the forward momentum of the auto industry. Buckminster Fuller didn’t get it right. But Henry Ford did. Ransom Olds did. Christian Von Koenigsegg did. Elon Musk did.

To take on a new and burgeoning industry is to make vehicles the world has never seen before. It is to undermine the notion of what must be and focus on what can be. It is to say, this does not yet exist, so it is up to me to make it so.

R. Buckminster Fuller had many good ideas, if he often fell short in execution. But one thing remains true of each and every one of his designs, no more so than the Dymaxion car–to make a difference in the automotive world, you must be willing to try something completely different. Despite his perceived failures, R. Buckminster Fuller most definitely made a difference.