Blinded By the Light?

Maybe you are old enough to remember Broderick Crawford and his 1955 Buick from the television series Highway Patrol.  Or perhaps, if you’re not quite that old, Martin Milner and Kent McCord and their AMC Matador from Adam-12.  Either way, you are remembering police cars with emergency lighting that is rudimentary in comparison to the digitally-controlled LED and strobe lighting on today’s emergency vehicles.

But are these modern lights a good thing? 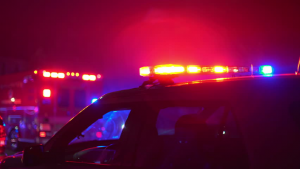 Certainly, we want emergency vehicles to be seen and for emergency personnel to be safe.  But today’s lighting may be achieving the former at the expense of the latter.  The modern lighting on police cars today is so bright as to effectively blind passing motorists at night.

We noticed this phenomenon in recent years when coming upon traffic stops in progress.  The flashing red-and-blue stroboscopic LED lighting on a single patrol car – let alone several where backup officers are on scene – make it impossible to see the road ahead.  This is true even when we slow to a walking pace.

We then learned that we are not alone in this.  The internet has plenty of online forums in which this issue is discussed, including several police-oriented forums.  Naturally, opinions differ on the extent to which this poses a problem, but the officers in the field are expressing their objections in significant numbers.

Among the comments that officers have posted are:

● I can’t tell you how many times I have been told that I could not be seen because the driver was blinded.

● I hate to be the trail vehicle when the officer in front does not turn off the rear facing LEDs.

● They should be dimmed at night, yes, because they are very bright.

So what’s being done about it?

Recently, we had the opportunity to attend one of the country’s oldest and largest police equipment trade shows, where we were able to speak both to officers and to the manufacturers.  The officers encompassed all ranks from Patrolman to Chief, and the manufacturers included companies such as SoundOff Signal, Code3, and Whelen Engineering.

The first officer to whom we posed the question, who was, in fact, the Chief of his agency, was in instant agreement that the lights are now too bright at night.  There was no hesitation on his part.  As we continued our inquiries through the day, no officer disagreed with the notion that the lights can be too bright at night.  The only disagreement was on the extent to which it poses a problem.

The manufacturers did not entirely disagree, but they had a distinct angle on the question.  To cope with excessive brightness at night, virtually all modern LED and strobe emergency lighting systems offer user-customizable settings.  Some even include sensors that can adjust the intensity for daytime or nighttime – but these sensors’ setting can still be set by the user.

Virtually all of today’s available systems are customizable to the purchasing agency’s preferences, but generally that does not include automatic day-night sensors.  The agency, or the officer in control of the vehicle, retains control over most settings.

The manufacturers have begun making some clever features available.  For example, most contemporary police cars have far more emergency lighting than just the familiar rooftop light bar, and some systems will turn off the rooftop light bar, leaving other lights functioning, when the officer opens the driver’s door after putting the vehicle in ‘Park.’  This so the officer is not blinded by his own light bar while exiting the car.  The rooftop light bar re-activates when the door is closed.

Still, even this feature won’t prevent the objection posted online by another officer:

● I have an LED bar atop my unit, on my front and rear dash, as well as the top of my windshield. It’s great while you’re pulling a stop for visibility, but I hate walking back to my unit after a stop because it absolutely annihilates my night vision for a few minutes.

If the officer’s vision can be annihilated, so can that of a passing driver.

Fortunately, several of the manufacturers to whom we spoke (and, certainly, some of those with whom we did not have an opportunity to speak) include among their customizable features the ability to lessen the flashing strobe effect either to the front of the rear, so that the officer can illuminate the area ahead while maintaining warning lights to the rear.  But the benefit of this feature accrues to the officer, not to the motorist approaching from the rear.

A related issue is “fixation.”  Studies have shown that people often will drive to the point at which they are looking, and if a passing motorist becomes fixated on the lights, they have been known to drive right into the stopped police car.  This tends to be found more often in impaired drivers, but it can happen to sober ones as well.

So, while there appears to be widespread agreement among both the driving public and the officers on the job that today’s emergency lighting can be so bright as to pose a safety hazard at night, there appears to be no groundswell to find a solution.  It appears, for the time being at least, that whatever adjustments are available are left in the hands of the individual officers – and those officers already have enough to do without having to be lighting technicians.