Social media has been around just long enough that it has become chic to remind us of the cringe-worthy posts, pictures, and statements we made before we realized that the internet was ever lasting. Last week, as I was perusing my daily onslaught of political commentary, feline fascination, and paleo diet recipes, I stumbled down the road of my personal This Week in Ruby Rae History, which brought up all of my postings for that specific date through the years. As I was longing reminiscing about my semester abroad four years ago, I was surprised to see a post that read “Atlantic City Car Show was fantastic! I can’t wait to go again next year!” 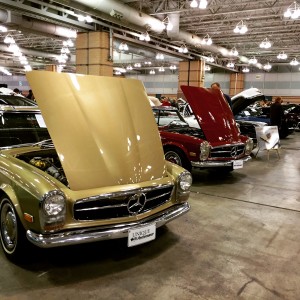 How can I not be surprised by this reminder of the glory days? Back when I was skipping high school bio (you can still suck it, Board of Ed.) to come to the show, it was worth the three hour drive and the weather worn feet and the all day exhaust fume headache. Way back, the show felt more like a three ring circus, a turn in any direction and you’ll be intrigued festival of chrome, custom, and cool.

Last year, I covered the show’s largely political descent into barrenness, but while I had high hopes for change this time around, I confess myself disappointed. In truth, this year’s show wasn’t quite so desolate as the last, but it wasn’t so far off either. I wouldn’t go so far as to say that huge efforts are being made to improve, when they really need to be.

I think one of the main elements as to why a show like Atlantic City feels the pressure of success so much is the potential for it. The convention center is enormous (my feet can attest), and it feels as though the very simple task of going from one end of the room to the other is an exhaustible feat reserved solely for the likes of Hercules himself to accomplish. It feels like a chore of epic proportion to even make it to the food court, and at least there you can sit your tired butt down.

Of course, it’s not the fault of the organizers that the floor is made of the hardest material known to the civilized world, some concrete/space rock combination designed to make a fairly active young person feel like they should honestly just remove their feet, because why even bother going on.

What I mean to say, in my rather roundabout and not at all personal-experience-influenced way, is that we focus on these things, our physical discomfort, the enormity of the space we’re supposed to explore, because there’s nothing to distract us. If the show were smart, they would be focusing on making every step from the farthest end of the food court to the tractor trailers worth looking at. They would have three rings at every turn, dancing monkeys and trapeze artists, and magicians, at least the automotive equivalent of.

Last year, not so long after the disappointing auto show, a friend and I visited another festival going on in the same convention center – the 2015 Beer Festival, which I would highly recommend. The long and short was that you pay a flat fee to get in, and get to go around to hundreds of stalls and get free samples of their beer, local, craft, national, international, they had a little of everything. What they also had were several bands, both headliners and locals, solo musicians, local food suppliers and crafters, a silent rave, a motorized toilet race, a yoga class, a 15 foot sandcastle, and an extreme pogo-sticking competition.

Will all of these particular elements work for the demographic of the AC show? Obviously not. But to see the enormous convention center feel busy, feel full, feel as if it might actually be worth it to walk to the other end of the room, proves to me that it’s possible. Way back when, the auctions of AC were open to the public, and we could hang out in the upper echelons of the only damn seating in the place and get a nice afternoon nap to the sounds of an over-enthused auctioneer and exhaust fumes. It’s definitely not as easy to get in and watch to auctions as it used to be and, to add insult to injury, they placed the stage dead center in the room. Us plebeians want entertainment too.

I know local bands and weird food stands and the whole nine don’t necessarily appeal to all of the masses, but I damn well think it’s worth a try. Atlantic City had its glory days, and I have the eternal Tweets to prove it, but they’ve lost their way. Whatever gave them their three-ring circus vibe is gone, and the show feels more like the moment a club turns on its lights, and everyone has to look at each others running make up and drunk dancing partners.

I don’t think it would take much to make AC great again, though by the state of the city itself, that could be a moot point. But if they brought in a band or two, hired some edible food (trucks) and gotten local vendors to show some interest, I think they could salvage the days of their past. I think they could be better. I think if they don’t, they won’t be anything at all. Car Shows, take note.