An Ode to the Chatterbox Diner

For years, Dad would drive us out to the far reaches of western Jersey, where our picturesque summer camp with its water slides and canoes would prove the background for childhood memories and adult memoirs alike. After I outgrew camper-dom, I began working at the same camp, spending summers driving my tank of an ‘87 Volvo station wagon around farmland, broken up only by ice cream shops and gas stations.

Along with Wal-Mart runs, the insistent lack of sleep that is a summer camp counselor’s due, and tie-dye stains on my fingertips, the Chatterbox Diner was a constant in those years. When coming from home, it would show itself gradually as we rounded a turn in the bend, first the domed roof, and then the overhangs, until the entire glorious, checkered, drive-in inspired beast was in full view. From the other direction, the nearly-in-Pennsylvania summer camp, the Chatterbox appeared like a mirage, somewhere off in the distance, something you keep driving to, but it’s a wonder if you ever make it. 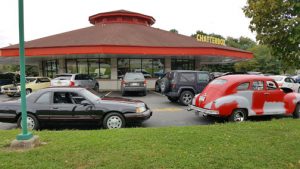 When you’re a suburbs kid living in the farmlands with a greater population of cows than people, everything seems so incredibly far away.

And yet, despite how far away it actually was, the Chatterbox was an incontrovertibly important part of my childhood. We would stop there for lunch on Saturdays after we got picked up from summer camp and headed back toward civilization. After graduating from high school, my friends and I rented a cabin not far from where I would work the following summer, and we made our requisite pilgrimage from the woods for hamburgers and ice cream floats. And, of course, those years working at summer camp, where adult conversation was rarer than gold and eating a meal that didn’t include bickering, sticky fingers or flung mashed potatoes required extreme sacrifice, the Chatterbox was where we went.

And now, with the recent closing of the diner this past Labor Day weekend, no one else will have such an experience. 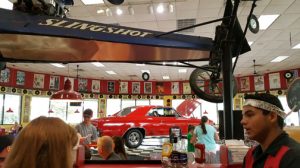 Because the Chatterbox Diner was an experience. The rotunda design, the peaked roof, it all brought to mind eras of girls on rollerskates and plastic dinner trays. In the center of the round building, a classic car was always displayed, a hot rod or muscle car, canted at a high angle and looking ready to hit the streets at any second. Movie posters and automotive memorabilia lined the walls and statues of ice cream sundaes and hot dogs were ubiquitous. It remembered an era bygone, and now, the era of remembering that past seems to be fading as well.

I don’t believe there’s a benefit to being stuck in the ‘50s. In fact, I think those car shows and events that toe such a company line are the ones that will fold where others survive. But there is something truly sad, truly noteworthy, about the shuttering of the Chatterbox Diner doors. My friends and I are not the only wandering souls to slide into slick vinyl booths and gaze around the room at a hundred movie posters. We are not the only ones to stumble onto Saturday night car shows and park out moderns (mostly moderns) in the grassy field beyond the parking lot so we may wander between creamsicle pickup trucks, mean hot rods and little red Amphicars. 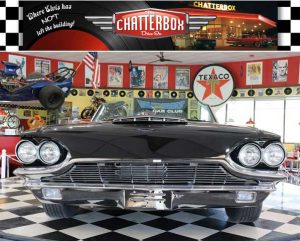 But, of course, nothing lasts forever. Soon, a Wawa will take the place of this iconic piece of Americana and those summer camp counselors and kids and high school seniors looking for adventure will have to find somewhere else to make their memories. I no longer live in New Jersey and though I’ll be out that way for a wedding next month, it will be too late to pay my respects to the old gal. Fifteen years is a damn good run, especially for such a remote location, but that doesn’t mean us old-timers won’t miss her. At the end of the day, though, as they finish selling off the memorabilia and donate a model of the restaurant to the Sussex County Historical Society Museum, there’s really only one thing you can say.

Thanks for the memories.