An Ode to the American Truck, Camper, and Wild West

I do not come from the land of big skies. Home was the most crowded exit off the Garden State Parkway, college was in a city where no one I knew bothered with cars, and even though my current address is more urban sprawl than skyscraper land, it still suffers from congestion, traffic jams, and rush hour standstills. With the exception of summers working at sleepaway camp, I have spent most of my driving years in areas with many, many other drivers, and, as such, the big American truck, the big American camper, and the big American sky are all foreign to me.

Or they were, until last week.

From Nashville to Bozeman, Montana, you cannot book a direct flight. Upon arrival, however, it feels like two short rides in small pond skippers are a small price to pay for a trip back in time. Montana, to this suburban-raised city girl, appears to have had almost no human involvement at all. There is one road, it seems, and it winds almost seamlessly between trees and mountains, subtle, an apology for intruding upon natural lands.

The little Hyundai Elantra we rented for the week would have been a delight to drive during Nashville rush hour but, as I can personally attest, it is not so much designed for winding gravel roads, sheer cliff faces, or the staggeringly dark highways of a Montana night.

I like pickup trucks, but I have long lamented the untimely death of the small and mid-sized truck. Modern trucks seem to embrace the bigger is better ideology with the enthusiasm of a football fan on Superbowl Sunday, bigger engines, bigger cabs, bigger beds. Often times, there is no benefit to the bigger, and it just seems as though we’re building out and up for the sake of it.

In the vastness of the Montana valleys, even the largest All-American V8, heavy-duty pickup does not feel too big. For those few days, we became incredibly dependent on those Ford F-150s. They ate up the miles to Yellowstone National Park, navigated tough terrain and open roads with ease, and provided excellent vantage points for both driver and passengers, as we explored some of the most ancient vistas the world has to offer. To find oneself close enough to a 2,000 pound wild bison to reach out and touch is, indeed, a humbling experience, one for which I was plenty pleased to have a pickup truck-sized barrier for. 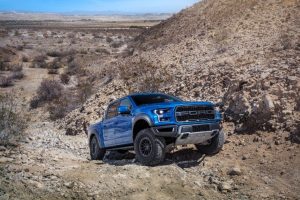 If the mountains and valleys of Montana are as they would have been billions of years in the past, then the parking lots and general stores of Yellowstone are as they would have been in the 1950s and 60s. There is a distinctly frozen-in-time element to the park’s attractions, Old Faithful and the Grand Prismatic Spring, and that merely enhances the experience. In fact, unlike most tourist destinations, where a multitude of white orthotic sneakers and fanny packs is detrimental to the experience, the Yellowstone tourist is, in fact, essential to it.

And thus enters the camper, the ubiquitous RV in small and large and extra large. It is, to the novice traveler, as much a symbol of Yellowstone National Park as the hulking bison and the spitting geyers, a representation of family and American travel, and the hope we find when we wander to the west. 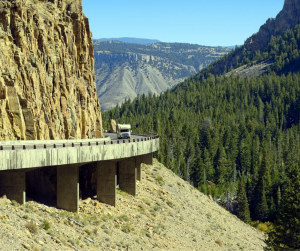 For years, I have trailed the American coastlines. I’m an east coast native that went to college further up the east coast. I have skipped my way over to California on more than one occasion, slipped into Nevada and New Mexico, hedged my adventures into Illinois and Michigan. My road trips have taken me, at the most, two states inland from oceans and other countries and even now, living in Nashville, the farthest west I’ve ever lived, I’m barely one state border into America.

Of course, Montana is not exactly middle of the country either. But it is a further cry from the America I know than I have ever been before, a place where the deer and buffalo roam, where the skies are spacious and the purple mountains rise like snow-capped, gilded crowns above plains, lush and fresh with summer fruit.

The American truck, wandering west RV narrative has been done to death. Ubiquitous in advertising, song, and media, the photo-copied version of a photo-copy has become so common that it is easy to forget, to never really know, that such a world exists, such vastness, and wildness are real. The place where the American trucks roam free and campers are as common as the crickets that take over the summer grasses. 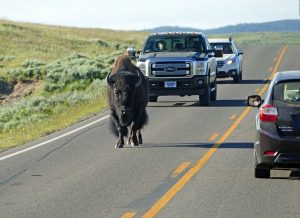 Montana is the land of big sky, Yellowstone the park of big animals. For this small-car driving, performance-enthused, hatchback loving city girl, it is also the land of big truck, big camper, and roads that might just be big enough for everyone. Even the all-American V8 with 450 horsepower. Or bison power, which honestly seems a lot more powerful, those things are  huge.

From the mountains, to the prairies, and yes, all the way back to the oceans capped with foam, there is an American driving experience for everyone–and I think I may have just found one of my favorites.

Photos selected from the Ford Media Center and others.