An Ode to Harley Earl and the Concept Car

For more than a few generations of car enthusiasts, it has gone without saying that the new year will bring about beauties and beasts from all corners of the car industry. When the season for international auto shows begins, we are inundated with all makes and models, from the super rare to the super common, the throw it and see what sticks to the I think they changed the tailpipes? Half of the great joy and wonder of these events is marveling at the creativity, innovation, and challenges that made up so many incredible, abysmal and almost but not quite models of the years to come.

We can thank Harley Earl for that.

Long before the sizzling supercars and the gravity defying SUVs, cars came to the showroom floor just as they were to be sold. Henry Ford sold his vehicles right from the room in which they stood, where forty years later an international Motorama would come closer to a museum than a car dealership. In the very beginning, there was certainly room for flipping the status quo, for bringing the new and insane to the market. Year after year Ford, R.E. Olds and the rest brought forth their latest brainchild to sell the future to the consuming public.

But because the auto industry was so very new, and so very very competitive, one thing there was no room for was dreaming for dreaming sake. Car designers did not produce sketches of swooping tail fins and curved headlights because they wanted to do so. They did not spend hours pouring over a drawing board for the sheer pleasure of trying to make the pieces fit. Engineers, designers, and mechanics did not put time and energy – on the company’s dime, towards creating the perfect model of a car that will never be built.

Of course, why would they? In the beginning, a matter of 100 or 200 cars could determine who was the most successful car producer for the year. Likewise, making a design so bold and bizarre that it would turn the public away from your product was not done as a challenge to your great employees, it was done at the risk of bankruptcy. Naturally, we do not fault the forefathers of our automotive history for this. What they were doing then is the only reason we are able to discuss it now.

But several decades after the first cars reached their consuming public, when it was no longer a novelty to see four wheels, instead of four hooves, upon a busy street, Harley Earl, a designer at General Motors, who would later go on to become Vice President, changed the way we think of the automobile.

Did it boost the sales of GM? You bet your fine, over-designed rear wing it did. But Earl’s introduction of  the 1938 Buick Y-Job – displayed on the grand stage of the streets of Detroit, is hailed as the first car ever created for sheer sake of trying something new. And for that, we owe him much. 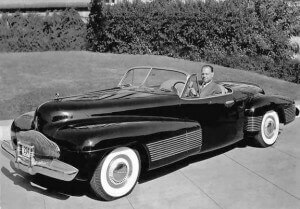 Digging down deep, one can look for the distinctions between concept cars, production intent, prototype and like, but much of this can be determined simply by looking at a car. Concept cars have come a long, long way from Earl’s Buick – which drove under its own power for many years, to the sleek, sophisticated, engineering the future type concept cars we have today.

The modern concept car is, arguably, as responsible for what ends up on the road as its production brethren, anticipating a modern highway population by designing in unique features, technologies, and luxuries, that no longer seem so outrageous a decade into the future.

But it’s more than that. Forget production. Forget sales. Hell, concept cars are, for all intents and purposes, a drain on the company system. All that work for the intangible attentions of an adoring public? But forget it. Instead, think about the importance of being able to dream for dreaming’s sake, applied to one of the most heavily consumed products in the world. Henry Ford’s Model T did not lack imagination, and it shirked from no challenges either. But if we were to apply the world in which the Tin Lizzie was debuted to today, you would find that every single car on the road would be identical to the last. Ford was operating in his world, his version of manufacturing the future.

The concept cars of today do the same. They stir up the pot, they slap gullwing doors on SUVS, put 12 cylinder engines into one-ton sports cars, drop headlights, double wing height and generally throw an uproarious party in the Ivy League dorms of the automotive industry during finals weeks. Concept cars are not just drawings come to life out of automaker narcissism. Concept cars are freedom. They are not hidebound to the strictures of regulation, safety, and speed. Instead, they take the world in which we know and love and tilt it to the left, combine all of our favorite elements of this sports car and that cross over, and turn it into some Frankenstein’s monster we cannot help but fall to our knees in adoration of. They are truly the cars of dreamers.

As a creative, I often find concept cars to be one of the most fun and exciting elements of the modern automotive industry. It is a science lab meets an art studio, the best of all worlds and the worst of none. After all, if they don’t ever need to drive, think about the opportunity.

If it were not for concept cars, and their eventually help in the popularity of motor shows and therefore sales and therefore the production of more vehicles (I’m looking at you, Corvette,) the automotive events – New York, London, Geneva, that we wait for all year would be mostly comprised of mid-sized sedans and pickup trucks. Even as we move towards the automotive west (there’s gold in them hills,) these shows would be awash in silver, beige, white and black crossovers and practical daily drivers.

Instead, the concept car pulls out the cigars, pours us a glass of wine, and turns up the music. They’re not here to stay, but they’re the life of the party, and it’s a good, fun time to enjoy them while they’re here.