The Drivin’ ‘O the Green

This St. Patrick’s Day, celebrate both Irish pride and the arrival of Spring by taking a drive in your 1959 Shamrock.

What, you don’t own a Shamrock, the “Irish T-Bird” built in Ireland? 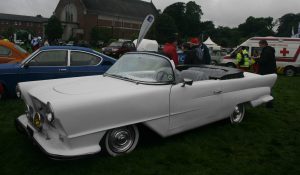 Well, don’t fret.  Almost no one owns a Shamrock.  Fewer than a dozen were built, and today only eight remain.  Curiously, all were white, although one of the surviving cars, here in the US, has been repainted green.

The Shamrock car was the brainchild of a Californian named William K. Curtis, who decided that a car produced in Ireland and sold in the US could help alleviate poverty in Ireland.  There was, however, a flaw in the plan:  The car, a five-passenger convertible, was poorly suited for American roads and for American tastes.

While somewhat smaller than contemporary American cars, the Shamrock, with a 17-foot-long one-piece molded fiberglass body on a steel ladder frame, was too big and too heavy for its 1.5-liter engine, sourced from Austin.  The engine produced a whopping 53 horsepower, not exactly what American were seeking in their cars at the time.

The 98-inch wheelbase of the Shamrock looked dinky under the cartoon styling, further limiting the car’s appeal.  The styling is credited to Alvin ‘Spike’ Rhiando, a Canadian and former 500-cc Formula 3 racer.  While some may argue that the Shamrock is not ugly, no one is arguing that it is beautiful. 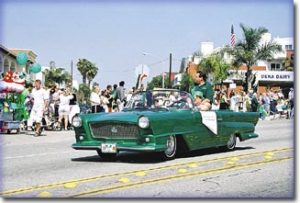 Curtis partnered with fellow American businessman James F. Conway and the entrepreneurs set up production in Castleblayney, a town in County Monaghan. The duo boasted that production would ramp up to 3,000 cars in the first year, shipped to the US and priced at $2,495 each.  However, only a handful of cars were produced in a six-month period and production ceased before the year was out.  The Shamrock proved to be sale-proof.

Unconfirmed stories say that after the factory closed, any leftover parts were dumped in a nearby lake.

But it is reported that three of the cars are in the US, so maybe, just maybe, you’ll see a Shamrock in your local St. Patrick’s Day parade.