This week, in the humble year of 1915, the one millionth Ford vehicle rolled off the assembly line. Imagine that. Imagine an era not far after the one-car-at-a-time days. Imagine a world in which Henry Ford had gone from madman tinkering in his garage to a household name with more than 25 assembly lines producing household vehicles for the American people with such ease that a company which had originally produced just a few cars a day did not even notice the one millionth mile marker.

It is, from a modern standpoint, difficult to compartmentalize. Not ten years early, in 1905, Ford’s annual numbers hovered around 1,599 cars. For the year. By 1915, the annual production for Ford vehicles had not merely jumped, it had broken through the atmosphere and hurdled toward space at a hundred miles a minute, with a staggering 501,000 car year.

Ford vehicles–and all vehicles on the road–would go on to change in shape, style, performance, and safety. In fact, to look at cars of that era would be to look at a period as distanced from our own as Medieval Times or the Golden Age of Piracy. In a world of same-day shipping and ebooks and streaming, the idea of such pain-staking production is truly mind-boggling. 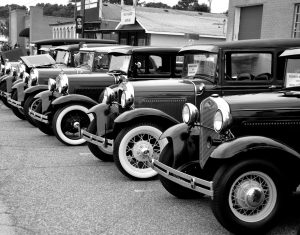 And yet, for all the yawning gap between the automotive world of 1915 and today, it stands to reason that there was a greater one still between 1903 and 1915. In fact, despite evolutions in engineering and design that would rival one age of great art period to the next, we are far more similar to those fateful nineteen teen years than they were to their decade-prior ancestors.

How could that possibly be, when the glorious millionth-mile marker predated such inventions as power steering and seatbelts and automatic transmissions. It is both simple and complex all at once. In 1903, the world of the automaker was a lawless one. Ford and Benz and Olds were not men operating within a set of rules or standards–they were, on the best of days, naive tinkerers with no thought for their own safety, on the worst, primed for the madhouse, destined to set their barns and carriage houses on fire, neglectful of their responsibilities and home lives in search of an impossible idea.

By 1915, the world was no longer questioning the horseless carriage. It was asking for more. It was asking for the affordable Model T and it was willing to buy it at 500,000 a year. Imagine such an implication as selling half a million cars in a single year, putting half a million cars on empty roads, pushing for new infrastructure and invention, carving a place in the world where the car was no longer the interloper, but a player in and of its own right.

Never before, not with the invention of airbags or disc brakes or hybrid technology, has there been such a dramatic shift in the context of the car. 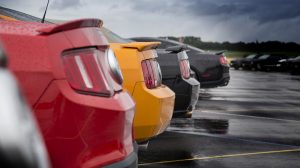 Henry Ford’s mad machinery hitting its one million vehicle marker is, in and of its own right, barely newsworthy. But when you imagine that it hits its one-millionth vehicle after twelve years and literally one-half of those cars produced were done so in a single year, the story changes. Ford may be producing cars by the millions now, but it is still a humble moment in the history of a company that changed the very nature of the car’s role in the very fabric of our world for good.

The last century and change have been remarkable where engineering, styling, and safety are concerned. There is no doubt that beauty, innovation, and wildness abound from each and every change to follow this auspicious mile marker. But though more time has passed, though more evolutions have taken place, none will be quite so grand, influential or everlasting as those few short years between the first Henry Ford creation and the one-millionth. They barely even noticed when it happened, but history has been noticing again and again for more than one hundred years.